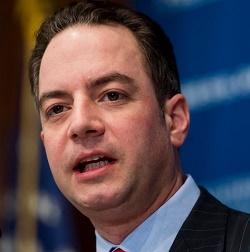 You can smell the stench of a political power-play--all of the way from the political parlors of Washington DC.   If this is Washington-brand politics we can expect here in Louisiana, forget it.

Villere, a high official of the National Republican Party has co-written a letter along with Priebus, vindictively responding to Jay Dardenne’s decision to support a democrat for the next Louisiana governor.  In doing so, they have laid down the gantlet, not just for Dardenne, and presumably former candidate Scott Angelle but for all other republicans for following their conscience.

The Republican Party leaders and all involved were so much better than this.  Or, at least, I thought they were.

In particular, so was my friend, Roger Villere.

In the letter today, Villere said, “"After decades of using the Republican Party and its members for his benefit, Jay has decided to end his political career by supporting a candidate who opposes every public policy position that he once espoused.” 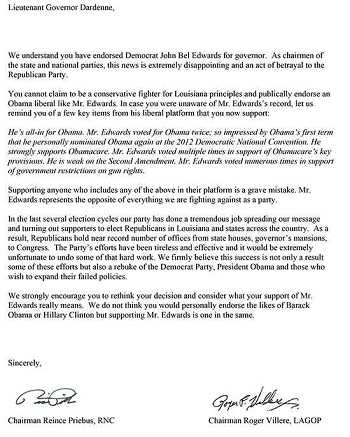 My God.  Are we living in Nazi Germany or Stalin’s Soviet Union or Communist China?  Is this the type of hypocrisy and bare-knuckle strong-armed party tactics we can expect from the republican party and from our next governor?

What Villere and the GOP are saying: “ if you endorse one of our opponents, you no longer have a political career”.

Ok, but I sure hope not.

So, maybe the same “courageous” bunch should now send the same public letter to Jefferson Parish Sheriff Newell Normand for his public contempt for David Vitter.  Perhaps the most popular politician in Jefferson Parish and perhaps one of the most respected in Louisiana should be so publicly condemned, threatened and ostracized.  Maybe Villere and company should include in the same letter, the same “Benedict Arnold-Nick Saban” style traitor comments to other republicans who have stood up to oppose the current Republican Party gubernatorial standard-bearer.

Speaking of courage, maybe Villere and other republican leaders should have stood up to the likes of Bobby Jindal when he lied to us when he abused us for his own personal benefit. Some members of the party did--but surely not Villere, not the party brass.

The Republicans are not the only to engage in such despicable practice.  This is exactly what makes all political parties turn my stomach.  You can smell the fumes of lock-step goose-stepping after major votes, such as Obamacare.  It walked in unison when Democrats—to a man--chose not to convict a lying and embarrassing Bill Clinton.  The stench remained when the Democratic Party publicly ridiculed a black democratic Senator for switching political parties, becoming, omg, the first African American republican legislator in modern history.

So, let’s put today’s incident into perspective:  Maybe Jay Dardenne and others, republicans and democrats alike, just might believe in the type of family values Jon Bel Edwards appears to emanate.  Just maybe they believe these family values lay at the center of our nation’s and the state’s future and or at the core of what makes this nation and state great?  Perhaps they are looking for a different type of leader—one they believe could be more symbolic of what they believe is important to their own lives, and to the lives of their sons and daughters?

Maybe Jay Dardenne, and others believe that the current republican choice simply is not worthy of governing the state?  Maybe they feel he has the right issues but cannot be trusted?

Or maybe, Dardenne and others feel there are more important precepts emanating with our society that must be embraced over others—such as, decency over materialism, the very same qualities that Jesus Christ would have favored?  Yes, maybe they know the economy won’t sing as well under a democrat compared to a republican and the state could be considered less business-friendly with a republican?  Maybe.

But, above all--maybe what is most important to them is instilling the confidence in the qualities of one man over the other, perhaps a real gold standard of leadership, ethical behavior and valor.

Dardenne and others have made and will make difficult choices.

And, for this, he and others should be blasted by fascist-type bosses for not toting the party line?

Perhaps more insulting and most hypocritical of all is the very fact that Roger Villere, in particular, worked against his party’s candidate in the past.

I am sure he remembers the fall of 1991, when he, after losing to David Duke in District 81 a few years before, strongly supported the “crook”, Edwin Edwards for governor.

He did this despite the fact that a majority of republican and democrat whites had previously backed Duke against Democrat US Senator J. Bennett Johnston and were in ’91 supporting Duke, for governor.

Sure, the GOP was different then.  It was governed by people with real conviction and not just men wielding threats based upon party loyalties.

Sure, things were a little different.  We were deciding whether to back a former Klansman, a Neo-Nazi and not a sitting US Senator running for governor.  However, back then, the Duke supporters insisted that the man had changed, that he was still a better choice than the Democrat and that we should be more forgiving.

Villere was not party chairman then.  He stood up for principle and values.

Unfortunately today, he stands up for the party.