Louisiana gubernatorial candidate, David Vitter, behind in the polls, is making the tragedy in Paris a last-minute political push.  In a letter he promoted on his campaign email yesterday and  by another campaign email today ( urging individuals to sign via Facebook pledge against Syrians entering the United States), the governor hopeful is clearly trying to maximize the terrorist attack in Paris and Syrian immigrants, to his political advantage.

Here is the email he sent via campaign email on Sunday:

I sent a letter to New Orleans Mayor Mitch Landrieu and New Orleans Police Department Superintendent Michael Harrison urging them to work with him and call on President Obama to change his policy on Syrian refugees and to deploy significant counter-terrorism measures. President Obama is planning to take in 10,000 Syrian refugees. Reports show that some have already arrived in Louisiana, and more are on their way.

A copy of Vitter’s letter is below. Attached is a letter that Sen. Vitter sent to the Obama Administration on Sept. 28 warning of significant security concerns with allowing a massive wave of Syrian refugees.

We are still reeling from the horrible violence of the recent attacks in Paris. As we stand with the French people, we must also take much greater precautions to prevent terrorists from settling into New Orleans as part of the current wave of Syrian refugees President Obama is sending here.

As you know, New Orleans is expecting an influx of Syrian refugees, some of whom have already arrived. Based on all the information available to me, I have no confidence that these refugees are being fully and properly vetted to ensure they contain absolutely no terrorists elements.

Please join me and others in demanding that President Obama stop accepting these Syrian refugees immediately, and stop settling any into New Orleans, given this unacceptable lax security and lack of full vetting on their backgrounds.

As you know, many other cities where these refugees have been settled have expressed strong security concerns. For instance, the New York Police Department announced this week that it is deploying all counter-terrorism resources to ensure there are no copycat or coordinated attacks in New York. We, too, are a port city and a major tourist destination, and as such, I request that the City of New Orleans and the New Orleans Police Department to deploy any and all counter-terrorism and public safety resources to crowded areas around the city, particularly the French Quarter.

Thank you for your service. I look forward to your quick response regarding asking President Obama to change his policy on Syrian refugees and your deployment of significant counter-terrorism measures.

Vitter campaign has just published and circulated the following:

This is really serious. John Bel Edwards has pledged to work with Obama to bring Syrian refugees to Louisiana.
This is a dangerous policy and exactly why we need to defeat Edwards. President Obama's ‎plan to bring 10,000 Syrian refugees to the U.S. is outrageous and irresponsible. That's exactly how at least one, maybe more, of the Paris terrorists got there. 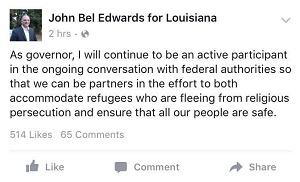 These Syrians have already started arriving in Louisiana. That needs to stop immediately, and I will continue to lead that fight and protect the people of Louisiana.
Join my fight to stop allowing Syrians into Louisiana -- I’ll be sending the stacks of signatures we get to Obama. Sign our petition to keep them out of here http://s.heyo.com/c72427.
Thanks,

More in this category: « Louisiana political parties that demand total loyalty look petty and vindictive JMC Poll: Edwards by 16 over Vitter; Jeff Landry, Billy Nungesser ahead of Caldwell, Holden »
back to top