Vitter blasts Edwards on Obama-Syria refugees-Paris terror: fair or not?

David Vitter is taking on Jon Bel Edwards and President Obama on the Syrian Refugee issue and the Paris terror attacks.

Last night, Vitter and Edwards discussed the issue in the debate:

Here was the exchange:

I said as Governor I wouldn't allow that to happen. And I have a consistent my opponent has staked out a very different position. In fact he staked out four. Last night he said he would fully cooperate with President Obama including refugees and today he's trying to change his tune, he'd now had four different positions in 48 hours. I don't know where he is but I know we can't trust where he might end up because he's always consistently supported President Obama including in terms of immigration enforcement or nonenforcement.

>>Fred: Thank you very much. Mr. Edwards we'll allow you a chance to answer that same question. What is the best way to approach the Syrian refugee?

>>John Bel Edwards: First of all as I told all David Vitter is desperate. He lacks a moral compass. On Saturday I called for a halt to all Syrian refugees coming into Louisiana. I also expressed support for Governor Jindal about those who were already here. Today I immediately when he issued the executive order said I supported the executive order halting the further immigration or I should say relocation of Syrian refugees into Louisiana. This is about public safety. The No. 1 issue that we face as a government and as Governor I will take it seriously. It is who I am. I know a little thing or two about protecting American lives. I'm a congratulate of the United States academy and I have pair atroopers and support the Sheriff association, the Louisiana state troopers association because they know that as Governor I will partner with them and work every day to keep the people of Louisiana safe. Senator you missed key votes in the legislature. I'm sorry in Congress

when you could have stopped this.

>>David Vitter: Absolutely. John, look at Edwards FaceBook post yesterday. It said he would fully cooperate with President Obama including in resettling refugees here. That is what it says. I realize he tried to change that tune. Fed we allow you 48 hours to respond.

>>David Vitter: Fred, I don't want to have a conversation I want to want a hold on this. We said consistent live

>>John Bel Edwards: Removing the refugees in Louisiana. I arounded a call you don't show up for work.

[Speaking at the same time.] We're moving on to issues here in Louisiana and the campaign. 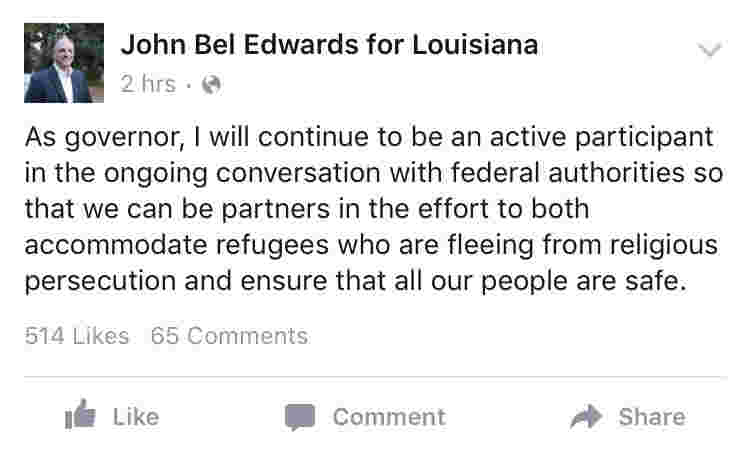 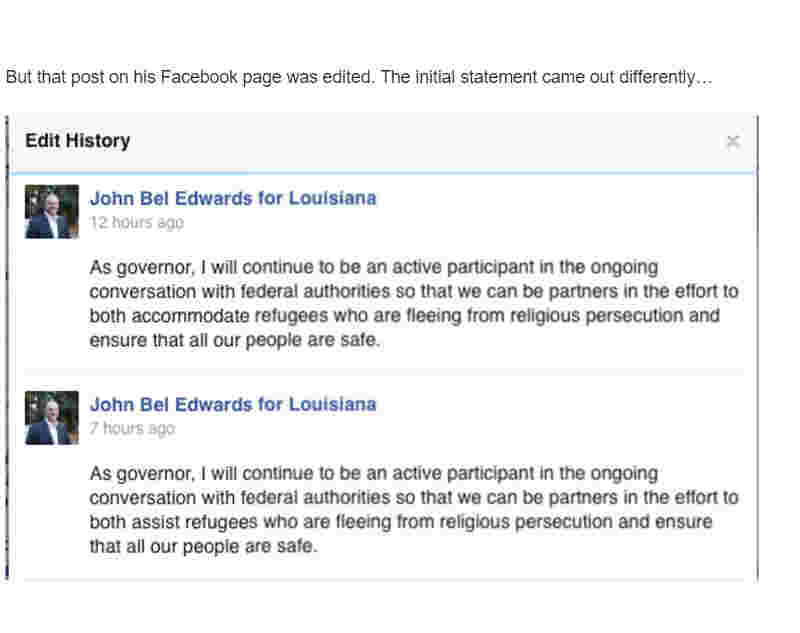 YESTERDAY, Edwards released the below

As reports over the weekend indicate that 14 Syrian refugees have arrived in Louisiana, State Representative John Bel Edwards maintained communication with law enforcement officials across the state.  Over the course of the weekend, he spoke, on numerous occasions, with Col. Mike Edmonson, Superintendent of the Louisiana State Police, and Mike Ranatza, of the Louisiana Sheriff’s Association, regarding the current status of refugees in the State of Louisiana.

“News reports indicate that more than a dozen refugees have made their way to Louisiana,” said Rep. Edwards.  “While we understand the need to provide a safe haven from those facing persecution, we cannot do it at the expense of the safety of our people here in Louisiana.  This isn’t political.  We have an obligation to put aside the partisan rhetoric and work together to keep our people safe.”

On Saturday, Rep. Edwards issued a statement calling on the Obama Administration to hault placing Syrian refugees in the State of Louisiana pending answers to questions from the Jindal Administration regarding the security measures in place.  To our knowledge, those questions have yet to be answered.  Weekend reports indicate that one of the Paris attackers used a potentially fake Syrian passport.

Rep. Edwards statement from the weekend was as follows:

"As an Army Officer, I took an oath to preserve and protect the people of this country.  As Louisiana’s next Governor, my top priority will be to ensure the safety of our people.  That’s why the LA Sheriff’s Association and the LA State Troopers Association are supporting our efforts.

"In light of the recent tragedy in Paris, it’s imperative for us to pause the influx of refugees flowing into our state without more information on the security measures in place.  Gov. Jindal has requested additional information from the President on how the federal government is handling the refugees being sent to Louisiana, and I think the President has an obligation to provide answers before we move any further.”

Today, the Vitter campaign released the above commercial

Is the attack on Edwards accurate and fair?