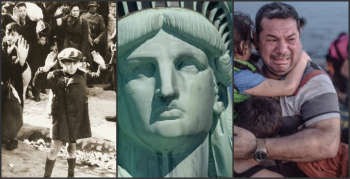 As a Jewish person, I find this powerful “anti-religious freedom” fervor both incredibly hypocritical but obnoxiously repugnant.  I am repulsed by the endorsement of a man and his xenophobia that seriously reminds me of the evil passions that engulfed Nazi Germany.  We are not alone in our anxieties of the unknown.  The good German people saw its economy destroyed, its honor denied and its people’s personal safety jeopardized.  Instead of finding solutions to its many problems, it reacted, following those who provided easy answers of blaming others.

What is occurring this week with a political campaign since the Burnings of Paris is a predictable extension of a campaign marked by take-no-prisoners, honor no truths.  Our own rush to label those--who are being vetted and who desire to share in the promises of liberty--as likely future killers, without any evidence whatsoever of their individual proclivities, is profoundly disturbing and cheapens us as a people and as a nation.

I am reminded of the Voyage of the St. Louis and similar events when Jews could not find refuge in Cuba or elsewhere.  Who wanted to take them in?    That black moment in history signified to the Nazis that if the world did not want them, they could be readily disposed.  They were returned to the horrors and hatreds of The Third Reich. The world forgot until it remembered.

Please don’t accept my plea as a sign of weakness.  Should we be concerned about our security?  Absolutely.  Security is our primal concern and the primary obligations of all governments.   We do need a pause to understand the real local, national and worldwide risks that befall us all.  But, let's review our own recent history.  When many of those who now link Edwards to Obama 's alleged plan to let the hordes into our homes, blamed the same administration for unnecessary intrusions conducted by the NSA and TSA, I backed the extra burdens.  Let me remind you that no less than the Republican National Committee opposed the security measures of the very agencies we needed then and certainly need now, to keep us safe.  Now, they feed the frenzy of fear.  After all, it's politics.

Many of those now screaming the “Syrians are coming”, were yelling, don’t grope, TSA.  Many of those who now demand this nation do whatever is needed to insulate us from terror, honored a traitor who gave up national secrets of an administration they claimed knew no bounds.  Back then, they denounced the long-arm of government who tried to protect us from the same type of risks we fear today.

Indeed and again, security comes first.  Despite the propaganda and lies from those who want to win at all costs, Jon Bel Edwards, a military man, made it known he wanted to accommodate refugees AND to provide for our security.  Literal logic of the written word results in--if no security, then obviously, no accommodation.  But, that is not enough for the hands of evil who choose to parse words and defy logic to aid the political career of a man filled with dishonor and lies.

Unbridled fear is not what inspired those who helped save and protect Jews and others when they hid in basements and attics to escape from gas chambers and life swallowed by inhumanity.

While David Vitter has been a very strong supporter of Israel and I thank him very much for all of his efforts in this regards, he and others condemn our wanting to find solutions to this problem.  He ridicules our even talking with the proper federal authorities for information which might help those running from religious persecution can find asylum while above all, keeping all of us safe.  How can we possibly expect a man to be a leader of this state if he is unwilling to talk to gather information to obtain an informed decision?

If this type of hysteria and phobia are what our great state and nation are coming to--that we cannot even converse over how to best deal with the lives of men, women and children avoiding the holes of hell, looking for a place they can live and worship in peace--then this is not a state or a principle worth fighting.

If we are so hardened by our anger, hate and fears of others stoked by a selfish man willing to demean our own sense of worth, then we might as well ask the ghosts of Hitler to forgive us for our sins.

I was proud when we stood up to this type of antipathy when we fought against David Duke and his rabid intolerant message of protectionism from the hordes of the unknown.  I did not know that he would pass his torch to another from the same neighborhood with essentially the same message, now seeking to be our people's leader.

“Wherever men and women are persecuted because of their race, religion, or political views, that place must — at that moment — become the center of the universe.”
―Elie Wiesel

How very little can be done under the spirit of fear.~ Florence Nightingale

More in this category: « Vitter, LAGOP mislead Louisiana voters on Syrian scare tactics Campaign Finance Director: Vitter is our hope on Syrian refugees in Louisiana »
back to top