So much for Bobby Jindal 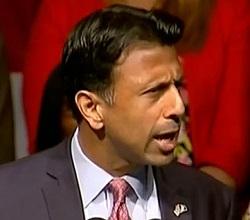 Former Louisiana state senator Sixty Rayburn was well know for his folksy sayings during legislative sessions.  He often urged his colleagues to never forget the folks back home when deciding issues at the state capitol.  Sixty put it this way.  “Always dancewith the one that brought you.”  It’s a lesson Bobby Jindal forgot during his quixotic campaign for president that ended abruptly this week.

Jindal’s early appeal was that he was a young, articulate republican governor with an Indian American background.  He wasn’t just another old white guy that has been the foundation of the national Republican Party in recent years.  Most Louisianans don’t remember what a dynamo of youth and energy he radiated in his early political career.  He was insatiable in traveling the state and seeking out problems to solve.

I remember back in 2005, following Hurricane Katrina, when I was having lunch with a local south Louisiana mayor.  Jindal was a congressman at that time, but did not represent that part of the state.  The mayor commented that Jindal regularly called to offer federal help, and shared his cell phone number.  “He was doing the same for other officials all over the state,” he remembered. “The young fellow seemed to be everywhere.”

Jindal took the same approach in his early tenure as governor.  His governing style was “hands on,” and he was readily available to the press and to the public. In fact, he was criticized by some for traveling each Sunday to a different church in the state, particularly in north Louisiana.  His popularity was sky high.

But then his hubris got the best of him.  National republicans, desperate to show that the GOP could grow a bigger tent, began embellishing the young governor as a future national leader. Ego took over, and Jindal began his quest to build a national image while ignoring Louisiana concerns.  Governing Louisiana became an afterthought.

Four years earlier, Jindal was ballyhooed as a possible vice presidential contender on a Mitt Romney ticket.  On paper, Jindal looked like a popular governor with an impressive resume’ to boot.  But that was then. The republican presidential playing field changed dramatically in four years. Jindal’s earlier strengths became current abilities.

Jindal was one of a number of governors who ran for the nomination this time, all assuming that their executive experience would be a major asset. But holding office has become a burden for GOP candidates. Donald Trump and Ben Carson have cut all these governors off at the knees. Jindal was just one of the mix and never could distinguish himself.

Jindal also counted on his policy experience as being a plus in attracting voters.  Governor, congressman, and heading up health and education departments all were part of his resume’ of being a policy wonk.  But most voters are not wonks.  Neither is Donald Trump or Ben Carson.  Numerous wonks have been telling voters how to solve the nation’s problems for years, but with feeble success.  Jindal got little traction with his institutional knowledge.

As his national campaign floundered, in desperation Jindal started lobbing grenades. He became incendiaryin his rhetoric, staking out extreme positions on numerous issues that turned many voters off.  Jindal’s rabble-rousing press releases were looked on by the national press as desperate efforts of a dying campaign.

But when all was said and done, it was the voters of Louisiana that pulled the plug on Jindal’s national ambitions. While Jindal traveled the country and abandoned his responsibilities as governor, financial problems continued to mount and voter frustrations boiled over. Current polls have Jindal’s unfavorability rating at 70 percent, the worst rating buy any governor in the past 100 years.

Louisianans became fed up with a chief executive who discarded his state responsibilities to further his own personal agenda. And this frustration was recognized by the national press. The line on Jindal across the country was that if he could not handle problems at home, how could he lead on a national level?  Jindal’s demise did not happen on the campaign trail.  He shot himself in the foot by ignoring Louisiana problems.

A new governor will soon take over and attempt to clean up the fiscal mess left in the current governor’s wake.  It is time to move on for the good of the state. So much for Bobby Jindal.

“I’m going to apply all my knowledge and training from my Ivy League and Oxford educations,… and as Chief Executive Officer of the state Louisiana. Here it is– here’s my sophisticated analysis: we have one hell of a mess.”