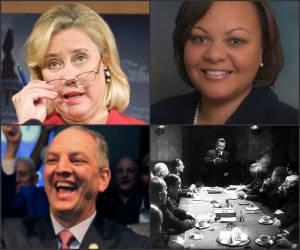 The Louisiana governor’s race, for the Democratic Party was the race from hell.  The notion that Republican powerhouse, David Vitter, could be the next governor, was the unfathomable.  The unthinkable.

Tyler Bridges, who covered the Louisiana legislature and governor’s race for The Advocate, discussed these issues in his recent post-election article.

In part3 off a recent interview with Bridges describes in more detail those developments (below).

SABLUDOWSKY: Then you mentioned quite a number of things in your article that I think a lot of people suspected but you put it out there and one of those was that certain Democrats were trying to urge him or persuade him for jumping, rather for staying as a candidate for governor. Would you take us through that please?

BRIDGES: I'll give you a little of the backdrop how I found that out which was on Saturday, election day I went to mass with Jon Bel Edwards, and I did that so I would have a chance to talk to him afterwards. It was hard to have to fit him, for him to fit me in unless I'm right there. So he agreed that he would talk to me afterwards. And as we were standing next to the confessional in the back of the St. Louis Cathedral, asking him "what was the most difficult moment for you during the race? ".    And he started talking about a meeting in July he said with two very influential Democrats. He would not identify who they were but he said it was the most difficult moment for him during the campaign--because they asked him to get out of the race. And I found out from other people, that this was not a secret among insiders that it was state senator Karen Peterson, Karen Carter Peterson and former Sen. Mary Landrieu. And they wanted him to run for Attorney General again this was in July. And as you mentioned, I wrote about this in a big Sunday story I wrote for the Advocate. And so I asked Karen Carter Peterson the day after the election about that and she wanted to talk about how Jon Bel got the Democratic Party endorsement back in March. She is the chair of the Democratic Party along with being State Senator from New Orleans. And so I said "what about the meeting?" And she said, "well we discussed campaign strategy and that sort of stuff" and so I said would you specifically address my question of," I know you asked him to get out of the race" and she said "you're going to have to talk to Jon Bel Edwards about that ". So she would not answer my question. I sent a text to Mary Landrieu who had also been at that meeting and to her credit, she acknowledged everything and she ended her text by saying that she had been wrong and was glad that she was wrong about it. Because it was pretty striking that they had wanted him to get out and Jon Bel told me that that was probably the darkest day for him on the campaign.

SABLUDOWSKY: Did you discuss who might have been the person that they tried to put in or where they a number of people who may have been jockeying to replace Jon Bel Edwards? I do know that you mentioned John Georges but I don't know if that's related to this here. John Georges was considering running at the time.

BRIDGES: Yes I think it that point that was part of the ABV campaign-anybody but Vitter. And Jay Dardenne, Scott Angelle were seen as acceptable alternatives to Vitter. And I think later there was an effort to get John Georges in the race and to have Jon Bel drop out-- so that John Georges would end up being the Democratic candidate.

SABLUDOWSKY: And so we don't know yet in terms of who they were talking about having to replace Jon Bel Edwards at that time

BRIDGES: There may not have been anybody, there may have been no Democrat in the race just to make sure that Vitter would not win.

SABLUDOWSKY: Right and the Democrats would be supporting possibly a Republican?

SABLUDOWSKY: You also mention that Bob Mann who is a blogger and who writes a weekly column for the Times Picayune had said, or suggested that Jon Bel Edwards not run or not continue the race because he thought that possibly the scenario would be correct and that Jon Bel Edwards would not be able to win and that Vitter would win. He was not the only person, I certainly felt the same way. A lot of people felt that way. So they were not alone. Was there anybody else that you talk to that felt the same way, that maybe Jon Bel would be a winner for David Vitter?

SABLUDOWSKY: Absolutely. Definitely. It's a small number for sure.