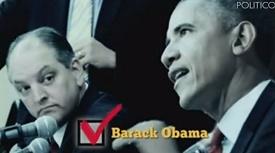 The Advocate reporter, Tyler Bridges discussed this in his recent interview with Bayoubuzz.com, publisher Stephen Sabludowsky.

SABLUDOWSKY: You also talked about the Robo calls from Pres. Obama, why don't you take us through that?

TYLER BRIDGES: That was on Election Day--they had recorded, Pres. Obama had recorded the call to send out to African American households that went out at 5:30 (pm). Why 5:30? Because polls close at eight is so that went out early enough to to get some African-American voters particularly to the polls because there was a fear that the turnout among that group, that demographic group was too low, but they didn't want to do it too early to have the Vitter people find out and use that as a way of tying Jon Bel Edwards to Pres. Obama which had been a central part of their campaign. So we don't know the exact impact of the Robo-call, we can assume that he got some number of voters out there. I don't think it made a difference because Jon Bel Edwards had obtained 56% of the vote but it was probably a smart political move deftly handled by the Edwards campaign

TYLER BRIDGES: I don't know the specifics at this point.