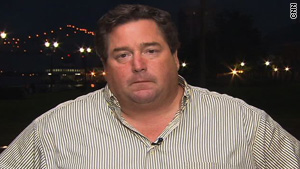 It just so happened that yesterday was a banner day in a race no one is talking about.

According to New Orleans news reports, Nungesser's Plaquemines Parish Government has received subpoenas for information dating back to 2007. This has been brewing for some time, as a State Legislative Audit was released last summer that cast doubt on the fiscal controls in Plaquemines Parish Government. For those of you keeping score at home, Nungesser assumed office in, you got it, 2007:

Sources tell FOX 8 News the feds are asking for every contract since 2007, every project work sheet since 2007 and payroll records on a handful of employees.

Wonder if Anderson Cooper will make it down to Belle Chasse for Nungesser's perp walk?

Nungesser has recently been churning up the waters about a run against Jay Dardenne for Lieutenant Governor. He has skewered Dardenne over the dispersal (pardon the pun) of BP-sponsored Tourism dollars. Nungesser thinks coastal communities affected by the BP spill should receive the majority of the money. We agree. But since the formula was determined before Dardenne entered office, it seems more like Billy is using this as a galvanizing issue to spark his campaign. From the Gambit:

Before leading the Downtown Irish Club's St. Patrick's Day parade as the club's Man of the Year, Plaquemines Parish President Billy Nungesser was pressing the flesh with GOP stalwarts at the Jefferson Parish Pachyderm Club's cochon de lait March 15, leading many to speculate he will run for lieutenant governor in the fall against fellow Republican Jay Dardenne.

Nungesser seemed to be picking a fight with Dardenne on March 9 when he publicly groused about Dardenne's distribution of the first tourism payout from BP — $5 million of an eventual $30 million boodle to be spread across all 64 parishes. Dardenne pointed out, correctly, that the deal had been made before he took office in November 2010, and he was just distributing the funds;

Nungesser has also recently begun a website renovation, often a canary in a coal mine for politicians gearing up for a race.

"The secretary has been tough, but fair in regulating the industry," John said. "At the same time, he has been very supportive in his advocacy of the state's citizens who work in our industry and depend on its survival."

This is really too rich. Oil Lobby publicly rewards chief local oil company regulator. Talk about regulatory capture by industry. It would be astounding if it didn't happen so frequently. Angelle's performance at the "Rally for Economic Survival" was highly praised by wingnut Randians for its attack on the Federal permitting moratorium after the worst environmental disaster in American history.

Politically, it was a stellar move for Angelle. Of course, preaching to wingnuts and financially-strapped oil field workers doesn't demand a high standard of reality. All red meat, all the time. Angelle is a lapdog for the Jindal Administration, and if Bobby is going to duck out of the Governor's office early, he'd really like to have a toadie like Angelle to take the reigns. That fuels the already rampant speculation that Angelle will enter the Lieutenant Governor's race this fall.

One place Angelle won't have trouble raising money from? The Oil Lobby. And around and around the Louisiana Carousel goes. Since oil slipped out from beneath the bayous, they've been in running the show, one way or another. Meet Scott Angelle, Big Oil's favorite son, and maybe your next Governor.

by Lamar Parmentel, Curator-In-Chief of The Daily Kingfish (Republished with consent)

More in this category: « North-South Louisiana Redistricting Plans Supported by Jindal Coming Unglued Louisiana GOP’s Rebuke Over Fayard’s Hate-Speech May Be Worry Signs »
back to top