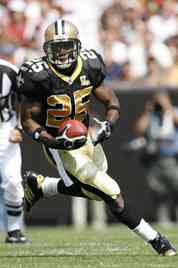 According to Yahoo Sports, the "framework" of a new collective bargaining agreement could be in place by the weekend.

If the two sides reach that point, they would then retreat to their respective corners to present the deal for approval. "A June 30 or July 4 announcement is a reasonable expectation," said Yahoo Sports' Dan Wetzel, agreeing with a CBSSports.com report that the deal was "80 to 85 per cent done."

ESPN's Adam Schefter weighed in on Tuesday night advising continued patience. In the face of a rampart "hope, enthusiasm and optimism," Schefter's source says, "There's some irrational exuberance seeping in."

Meanwhile, Darren Sharper said that he wants to return to the Saints, but also needs to weigh whether he's OK being a role player or if he's better off going someplace where he could possibly start.

In Sharper's opinion, he still has the goods to be a full-time player.

"Everyone knows I would love to come back and play for New Orleans, a city that's been great to me and an organization that has been great to me," Sharper, 35, said on Tuesday's "Cover Two Podcast," on NFL.com. "The only thing about that situation is if I feel like I'm healthy as I was during or Siper Bowl year, I want to go back and have a lot of opportunities to play.

After a Pro Bowl season in which Sharper had nine interceptions and was one of the most dynamic defensive players in the NFL, he started just one game in 2010 after offseason knee surgery limited him to eight regular-season games. Jenkins, the Saints first-round draft pick in 2009, was a  solid replacement after moving from cornerback to free safety.

Time for a look at the players who have the most at stake if labor peace is not reached and the 2011 season is not played.

ESPN.com has surveyed NFC South base salaries for 2011 and 15 players are scheduled to earn $5 million or more this season. The figures include only base salaries.

Here are the top 15 scheduled base salaries in the NFC South for this season:

TALK ABOUT THESE ISSUES BELOW AND USE OUR BAYOUBUZZ FACEBOOK FEATURES.  JUST LOG IN WITH THE BLUE FACEBOOK LOGIN ABOVE AND TO YOUR LEFT. WATCH THE MOVIE FOR MORE INFORMATION

More in this category: « PAR: Louisiana Tax Phase Out Is Fatally Flawed Jindal Makes Picks To Major Louisiana Boards And Commission »
back to top