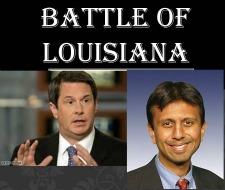 Who will be our next Governor?

Republican Gov. Bobby Jindal is term-limited and cannot seek a third term, and the next governor’s election is not until 2015, but that hasn’t stopped visions of being the state’s chief executive from dancing in many wannabe heads.

The list of candidates will, obviously, be a long one since it is an open seat. Republicans are hoping to hold on to the most powerful governor’s office in the country, while Democrats are hoping to take back the office it has dominated for past decades.

So, who wants to be governor of Louisiana? At the top of the list of potential candidates, it appears, is Democrat John Georges, a wealthy New Orleans businessman. He asked renowned pollster Dr. Verne Kennedy of Market Research Insight (MRI) to do a poll to test the political waters in the state.

It seems Georges has a fire in the belly to be in elected office. He ran for governor in 2007 as an Independent and received 14% of the vote. In 2010, he ran for mayor of New Orleans as a Democrat and finished third with 9% behind two other Democrats.

Who did Kennedy include in the poll with Georges? They are all Republicans. The list included U.S. Sen. David Vitter, Lt. Gov. Jay Dardenne, state Treasurer John Kennedy, and Jefferson Parish Sheriff Newell Norman.

MRI polled 600 likely voters in its survey. Here are the results:

Of course, it is way too early to nail down who will run for governor three years from now – or sooner if Jindal is picked for the GOP vice presidency. There will likely be candidates who are not on MRI’s poll list. But the poll does reflect how voters are feeling at the moment.

Republicans will try to pick a candidate and keep other candidates from entering the race and diluting the GOP vote. The speculation is that Vitter is definitely interested in becoming governor.

But unless Vitter’s forces mend fences with Jindal’s forces, things could get very interesting in the Republican Party’s effort to retain the governorship. And some analysts believe that the days of the state GOP assuring that only one Republican is in the race may be over.

Democrats will be hoping for a standard bearer, as well, but, as we have seen, it is hard for Democrats to get their act together and keep an African-American candidate out of the race.

The Kennedy poll also reflects that 33% of those queried are not even thinking about the next governor’s race, saying they are undecided. When MRI asked about a head-to-head race between Georges and Vitter – not an impossibility – the Republican senator came out on top by 37-33%.

How did Jindal do?

The MRI poll was conducted shortly after the legislative session ended, so a lot of the fallout from some of the controversial proposals of Gov. Bobby Jindal had not yet been pondered.

Nevertheless, the poll showed that Jindal’s political stock appears to be on the wane. His approval rating – those who are totally satisfied with the governor – was 53%. That is down from earlier polls, which gave him an approval rating as high as 66%.

Thirty-nine percent said they were totally dissatisfied with Jindal with the rest saying they were undecided.

Only 29% of respondents said that Jindal’s endorsement of a candidate would mean something to them; 31% said they would vote against a Jindal-endorsed candidate. It makes no difference to 40%.

Favorable name recognition is always important to a candidate for elected office. Here’s how poll respondents viewed the potential candidates:

When asked if they favored a Democrat or Republican candidate, 37% said Republican and 31% said Democratic. Thirty-two percent were undecided.

Asked what the major problem is facing the state, here’s what those polled said:

History in the making

It was sort of an historic situation last week when former Democratic Govs. Edwin Edwards and Kathleen Blanco showed up at the same time to visit with their friend, Angelo Roppolo, who is in hospice at Grace Home.

Roppolo had helped both of them in their political careers, and they came to pay their respects. Earlier in the day, Lt. Gov. Jay Dardenne also visited Roppolo.

All three were in Shreveport for the Louisiana Hayride Foundation’s luncheon where Maggie and Alton Warwick honored them and others who have helped with preserving the history of the Louisiana Hayride, the KWKH show held at the Municipal Auditorium in the late 1950s and 1960s.

The Hayride launched many singers and musicians to stardom, including Hank Williams, Elvis Presley, Johnny Cash, and George Jones, and Faron Young of Shreveport, to name a few. The celebration was part of Louisiana’s 200th anniversary as a state, which concluded with a Hayride Jam at the Municipal.

Edwards, as usual, had a quick wit and was dapper in his appearance. He was accompanied by his wife, Trina. The four-time Louisiana governor will be 85 years old on August 7.

Blanco, the first woman governor of Louisiana, was in good spirits and appears well after some health problems. She was accompanied by her husband, Coach. She noted that two of her children are now Shreveport residents.

Dardenne was not shy in saying that he is interested in running for governor in 2015. He is already out and about testing the political waters.

FAX-NET UPDATE is published weekly and delivered to your home or office by fax or e-mail. Subscription rates are: $50 for 12 months (50 issues) or $35 for six months. To subscribe, send check or money order to: Fax-Net Update, P.O. Box 44522, Shreveport, LA 71134. If you have questions, tips or want to do a guest column, call 861-0552 or send e-mail to louburnett@comcast.net. Lou Gehrig Burnett, Publisher.