US Space Program Reaching Out For New Frontier: Muslim World 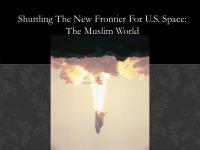 Now that the space shuttle program has been retired, NASA can start focusing on its primary mission: reaching out to the Muslim world.

Back in 1961, John F. Kennedy promised that America would be the first country to land a man on the moon. It was an exciting time for the space program and many amazing accomplishments were achieved, including the fulfillment of Kennedy’s promise, the moon landing of 1969.

It is quite sad to see how NASA has suffered in the last four decades. Instead of excitement about the space program, there is a sense that it is coming to an end with the retirement of the space shuttle.

Who could have predicted that NASA would no longer explore space, the final frontier? Despite all of the technology breakthroughs in the last four decades, our country is currently incapable of replicating what was done in 1969, sending an astronaut to the moon.

NASA is a perfect example of a government bureaucracy that became inefficient, top heavy with management and lost sight of its most important objectives. Back in the 1960’s with the advent of the Apollo program, NASA was an adept and nimble agency, able to meet Kennedy’s ambitious challenge.

Today, we have a President who is not asking the agency to shoot for the stars. Instead, Barack Obama has other goals for NASA, such as studying the so-called problem of man made global warming.

Liberals like President Obama do not want astronauts reaching for the stars, they want rocket scientists to place their focus on Planet Earth, studying global temperatures and producing research that will support green energy initiatives.

Incredibly, President Obama’s other primary mission for NASA is to reach out to the Muslim world. Last year, NASA administrator Charles Bolden told Al-Jazeera television that President Obama gave him three primary tasks: encourage children to learn about math and science, improve relations with foreign nations and "perhaps foremost, he wanted me to find a way to reach out to the Muslim world and engage much more with dominantly Muslim nations to help them feel good about their historic contribution to science ... and math and engineering."

It is ludicrous for NASA to be focused on international relations, Muslim outreach or boosting the self esteem of the Islamic world. It is just another indication of how far the agency has strayed from what should be its primary mission.

For the foreseeable future, our country will have to hitchhike on the Russian Soyuz capsule to reach the International Space Station at a cost of more than $50 million per passenger. The plans to reach the Moon and Mars have been scrapped and future space initiatives seem very questionable.

Space exploration is a worthy goal for the United States government to pursue. In the past fifty years, we have achieved amazing technological advances and been able to inspire decades of young school children with the NASA program.

Today, the program is literally earth bound and playing a diplomatic game of Muslim outreach.

The diplomacy should be left to the State Department and the climate research should be the domain of the earth scientists.

NASA should be focused on the heavens above and exploring the last frontier, space.

Hopefully, the program can be revived in January of 2013 when a new president will occupy the White House and restore the dreams of American children and the livelihood of thousands of NASA employees who are now looking for work in this horrible Obama economy.

More in this category: « U.S. Debt Not 14.3B But 75B; States Hiding Theirs Louisiana On Bad List Of Debts Owed By States, But Now Using Good Numbers »
back to top