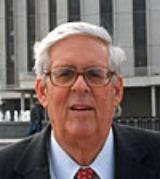 I have known Gene Schreiber for more than a decade.

I have just learned of his death.

Not only do I think he was one of the most humble and committed person I have ever known, but also one of the kindest.

The World Trade Center has just forwarded this statement to me less than one hour ago.

It is my honor to publish it to honor a truly wonderful man and a man of the world.

Gene Schreiber was a giant in the field of international trade and economic development. His energy and optimism motivated everyone he met, and his tireless work for New Orleans and Louisiana made a lasting and positive imprint on the economy of our state and region.

Gene’s leadership as Managing Director of the World Trade Center, over a career that spanned more than three decades, set the standard by which all of us who work in the field of international trade and commerce should be judged. His initiative and sheer will was often the difference between real achievement and simply settling for the status quo. Even against the insurmountable odds and overwhelming despair following Hurricane Katrina, Gene was unflappable, a combination of cheerleader and head coach, always charting a clear path to victory and a return to prosperity and “commerce as usual”.

In Gene’s career at the helm of the World Trade Center, and in his work as a Foreign Service officer around the globe, he accomplished things and lived a life most of us can only aspire to. He played host to the world’s most important people including Ronald Reagan, Mikhail Gorbachev and Henry Kissinger. Yet, Gene always made it his highest priority to encourage and assist that budding entrepreneur, that young college graduate looking for advice , or that man or woman with an untested or untried idea that “might just catch on” in the international market.

Gene’s ability to relate to, and connect with people of all walks of life in every stage of his life was a gift he gladly and humbly gave.

A true citizen of the world, Gene shared his brilliance, boundless energy and cheerful optimism with the world and we are all richer for it.

A memorial service will be held on Monday, July 25, 12:00 noon at Temple Sinai in New Orleans, 6227 St. Charles Avenue, with visitation preceding the service at 11:00 a.m.  The family has asked that in lieu of flowers, donations be made to the Ochsner Blood Bank (www.ochsner.org) or the Leukemia and Lymphoma Society (www.lls.org).

More in this category: « Jindal, Elections And The Hot Summer Of Louisiana Politics U.S. Debt Not 14.3B But 75B; States Hiding Theirs »
back to top