"It is a tremendous honor to be confirmed as a United States District Court Judge by the United States Senate.  It is also an extraordinary honor to have been nominated by President Obama and to be recommended by Senator Mary Landrieu to serve as an Article III judge," Jolivette Brown said. "The collective confidence in me is humbling, and I look forward to serving with integrity and a commitment to the rule of law."

“Today’s unanimous confirmation by the Senate confirms what we have known all along: Nannette is well equipped with substantial and vast legal experience to serve our state on the federal bench,” Sen. Landrieu said. “She has a heart for justice and compassion, and her life has been committed to the law and fairness.”

Jolivette Brown emerged from a humble background to become one of the first African-Americans to hold a leadership position in the New Orleans Federal Bar Association.  In addition to her work as a practicing lawyer, Jolivette Brown has served as a law professor at Tulane Law School, Southern University Law Center and Loyola Law School and as a mediator.

Jolivette Brown appeared before the U.S. Senate Judiciary Committee on May 4, 2011, for her confirmation hearing. During the hearing, both Sens. Landrieu and David Vitter, R-La., praised Jolivette Brown and urged the committee and full Senate to quickly confirm her. 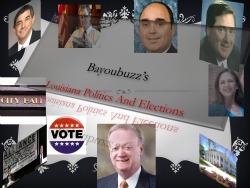 Poll: Dardenne vs. Nungesser For Louisiana Lt. Governor--SEE WHO IS WINNING!