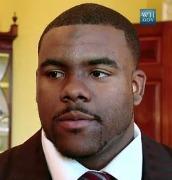 “World champion” as in major league baseball after they won the World’s Series on Friday.

Which means the city could be sky-high to show its mettle as there hapless team meet the New Orleans Saints who posted their Super Bowl foe Indianapolis Colts 62-7, who played without Peyton Manning.

The Rams will be playing without QB  Sam Bradford, so, unless the Saints have a major letdown and St. Louis finds their inner-self after losing all of their games this year, Drew Brees and gang might waltz down the river back home after a job well done.

Look out for:  The Saints also have their own injuries with Mark Ingram sitting out with an heel injury.  Chris Ivory, who was their leading rusher last year, is returning to the field, but it is uncertain how much playtime he will receive.

Another major injury for the Saints?  Sean Payton who is recovering from leg injury will be up in the stands watching coaching from above.