The Fall and the Rise of Piyush Bobby Jindal 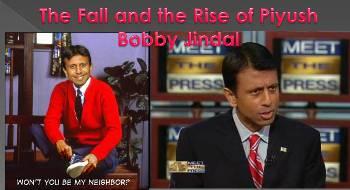 Louisiana Governor Bobby Jindal, a name once publically scorned after his embarrasing Mr. Rogers puppet speech during the early Obama stimulus days, has obviously risen up the ranks of the future leaders of this country.

The word around the political nation is that he is in the top three of the closed-fraternity of GOP Vice President picks.

One report actually has Jindal down as number two.

Which is astounding when you consider his roots, which just might be one of the reasons for these top-shelf spot speculations.

Jindal’s parents are from India.  Jindal is a son of immigrants.

Romney is not.  He is the son of privileged.  Not that this is lineage should necessarily be held against him for President, but it is a fact.

Jindal, whose given name is Piyush, who converted to Catholicism from Hindu, is different.

In a country where Hispanics, African Americans and other minorities are gaining a strong leverage in national elections, Jindal for Vice President makes sense for many reasons, including the fact that he comes from humble beginnings.  It also helps plenty that he talks faster than ears can hear.  I believe his occassional stutter is due to his brain thinking faster than his or any mouth can move. Regardless, anyone who has met him walks away from that experience feeling they have met someone on the rise and indeed moving very fast.

Last week, Bayoubuzz began its series the Good, the Bad, the Pretty and the Ugly to aggregate excerpts of the current news reports discussing Jindal, his chances of becoming the number two of the GOP ticket, his background, and his governing.

In the long history, Louisiana has never been blessed with a person so close to position of political power.  Obviously, whether he is ultimately picked as a running mate is Romney’s choice.

Whether we are days away or weeks away from that ultimate determination,  Jindal is garnering plenty of ink.

So, here's the latest:

Republican presidential candidate Mitt Romney appears to be in the final stages of deciding who to pick as his vice presidential running mate, with speculation growing that he has narrowed his choice down to a short-list of three.

Ohio Senator Rob Portman, former Minnesota Governor Tim Pawlenty and Louisiana Governor Bobby Jindal all offer various strengths to Romney should he decide to pick one of them to join his battle to unseat President Barack Obama and his vice president, Joe Biden, in the November 6 election….

But there is also a strong sense that Pawlenty could emerge as the No. 2. The conservative from Minnesota ran for the 2012 Republican presidential nomination and was the first major contender to give up, after a dismal performance at the Iowa straw poll last August….

Then there is Jindal, an Indian-American who met with Romney in Baton Rouge, Louisiana, on Monday before they appeared jointly at a fundraiser. Aides said the two men did not discuss the vice presidency.

At the event, Jindal assailed Obama as the "most liberal, incompetent president since Jimmy Carter was in the White House" in the 1970s.

"This president cannot run on his record so he has to lie about Governor Romney's record," Jindal said.

Merle Black, a political science professor at Emory University in Atlanta, said Jindal, as an Indian-American, could help Romney extend his appeal beyond non-Hispanic white Americans and is well-liked among conservatives.

"He has the potential to excite conservatives more I think than any of these other candidates," said Black. "If Romney were to do that, that would be an indication he's going for broke, because a safe choice would be Portman or Pawlenty."

Romney praised Jindal for his accomplishments in Louisiana, focusing specifically on his education policies. Noting that 80 percent of New Orleans students are now in charter schools, the candidate touted their improving test scores.

Jindal, for his part, denounced the Obama campaign's strategy in his opening remarks.

"If you've turned on the TV, listened to the radio, maybe you've noticed that our president has run an increasingly desperate campaign. Every time you turn on the TV you see another false and malicious attack," Jindal said

"We have a president who hadn't run anything before he was in the White House," Jindal said. The governor later referred to Obama as the "most liberal and incompetent president since Jimmy Carter. No offense to Jimmy Carter."

"The ink wasn't even dry on the Supreme Court decision upholding the patient protection Affordable Care Act before Governor Jindal unilaterally announced that Louisiana would not be participating in either Medicaid expansion or in the creation of the state health insurance program," Peterson said.

She said Jindal offers no alternatives to the federal health care law despite opposing it so adamantly.

"It's selfish as he goes around the country touting his resistance to federal laws to bolster his own vice presidential predictions while the Louisiana healthcare system crumbles," she said.

From a vetting perspective, Jindal has obvious downsides. Among them are an element of his background sure to dominate cable chatter if he were selected. In December 1994, Jindal wrote an article in the New Oxford Review (teaser here; subscription required for full version) that details his presence at the dorm-room exorcism of a female friend. Without casting any aspersions on Jindal’s beliefs, it’s safe to say that Romney — who has dealt with an undercurrent of bigotry toward his own faith — likely wants to avoid a protracted discussion of religious practices that would overshadow his focus on the economy.

Jindal’s record as governor would also come under critical scrutiny. As the Wall Street Journal wrote in a glowing profile this week, Jindal “has won plaudits for his smooth handling of crises such as 2008′s Hurricane Gustav and the 2010 Gulf Oil spill.” As I wrote at the time, Jindal became a hero for his aggressive attacks on the federal government’s response to the spill. But his policy prescriptions were questionable. Jindal pushed hard for the government to construct a pricey barrier of sand berms to protect the state’s marshland from oil, and the project was ultimately OKed over the objections of scientists. An investigative commission subsequently found that the project was a $220 million boondoggle that captured little oil. In a way, it’s not surprising that Jindal’s view broke with the scientific community; as governor, he signed a bill that provides for the teaching of creationism in public schools.

Romney met with Governor Bobby Jindal of Louisiana Monday on a fundraising visit to Louisiana. Jindal has campaigned for Romney recently. The 41-year-old has experience helping to handle disasters such as the 2010 Gulf oil spill. His personal story as a US-born son of Indian immigrants also could resonate. But his staunchly conservative views on social issues – he opposes abortion and gay marriage – could drive away more socially-liberal and independent voters.

Gov. Bobby Jindal's budget office won't provide most of its records tied to the state's alternative fuel vehicle tax credit program and a controversial ruling about qualifying vehicles that was rescinded by the governor.

A lawyer for the Division of Administration said records requested by The Associated Press are shielded by a public records exemption. Only one e-mail was provided. Other records were kept hidden, citing an exemption given to the governor for items involving his "deliberative process."

For months we've known that Romney would go for a safe pick --no more Palins -- and months ago Politico reported that his running mate would be an "incredibly boring white guy." But every time the list gets whittled down to Boring Guys Only, the campaign makes some quick edits. Examples:

Ann Romney suggested a woman was still in the running July 5, after NBC News reported June 19 that Palin had "poisoned the well" on a woman VP.

Romney allies floated Condoleezza Rice as at the top of the list last week, after Portman admitted he'dmet with Romney's top veep vetter two days earlier. (The timing of the Rice report probably also had something to do with the controversy of Romney's quit date at Bain Capital.)

When ABC News reported in June that Florida Sen. Marco Rubio wasn't being vetted, Romneyimmediately insisted that Rubio was being "thoroughly vetted" after all. Why did Romney break his vow of silence on the veepstakes? Republican consultant Ana Navarro put it succinctly: "There is a lot more to gain from the perception that he’s being vetted than reports saying that he isn’t."

And, again, there's this week's confusion. The Times report Monday that Romney was picking either Pawlenty or Portman was immediately followed by Tuesday's report that the list was really Pawlenty, Portman, and Jindal, the first Indian-American governor.