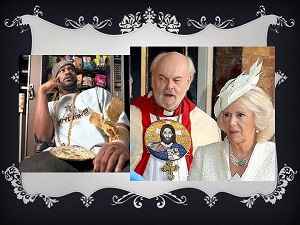 Or, as the rappers say, he wore a "Jesus piece."

A big, fat gold medallion with the face of Jesus Christ on it.

Well, not "unnoticed." Actually, there was no way NOT to notice!

It’s just that most people weren’t quick to say, "Whaaasaat?" when they saw it.

Instead, we first had to do the obvious evaluations of fashionista things like the Queen’s blue ensemble (pretty neutral in appearance), Camilla’s coat that looked like a hairy throw rug that an enterprising design school student decided she could cut up and sew into a bespoke outfit to win some kind of fashion prize, and Zara’s unobjectionable but oh-so-dark navy set that would have been fine at a funeral. We also had to watch the slimmest bit of video that showed us Prince Charles looking a bit sheepish as he greeted his parents, Camilla making a very nice curtsy and kiss to the people who are finally her in-laws, Prince Harry making a very gentlemanly bow to Her Majesty his grandmother with his hand over his heart, Kate doing this ridiculous bobbing thing that was not at all a proper curtsy to the monarch and her consort, and then William not bowing or kissing, but just kind of giving a vapid, hapless look about, aimlessly holding Prince George, and waiving little George’s arm about in some kind of wordless greeting to his Sovereign.

But then, we saw it!

And then we all said, "Whaasaat?"

It was a gigantic Jesus medallion, around the neck of the 132nd Bishop of London, who is only the third highest Anglican cleric in the land.

A Jesus piece. A big, fat gold medallion, just like the kind that the rapper Cappadonna likes to wear and sing about. Or rap about. Or whatever it is that the man who calls himself "Cappadonna" creatively does. Uhm, when he performs, that is.

Not that I have ever actually seen him.

Cappadonna, that is. Who is definitely not a bishop, but is nevertheless a gentleman who, like the Bishop of London, not only wears a very large medallion, but sings about it, something along the lines of this: "Come up strong but you scared of Staten Island, all on my chest, oh, di big fat medallion, wid di two big medallion, good, yuh, perfect?"

And then there are a lot of unfamiliar slangy words that I can only assume are about sex and body parts.

But nothing referenced by Cappadonna is as big as di big fat medallion worn by the Bishop to Prince George’s christening!

Who knows what other big fat things are lurking about!

I did mention that rapping is this plethora of unfamiliar slangy words, right? Sex and body parts, right?

So, unlike Cappadonna, we will stick to the big fat thing that is hanging outside the Bishop’s robes–not inside or elsewhere.

Thank goodness that Edward Malnick of the London Telegraph explained it all to us, or I would have been totally lost, and wondering if the Bishop of London was caught in the middle of rapping to inner-urban youthful Anglican worshippers, as some of the hip and hip-hop younger clergy are wont to do. And since we are always being told how very "young" and "hip" and "hip-hop" the thirty-something duo of Prince William and Kate Middleton are, having vacationed with Uncle Gary on Ibiza and all, I might have wrongly assumed that the Bishop had just returned from (or was then heading off to) a Bustah-Man community gold-chain evangelical "Was Jesus Christ a Rapper?" sort of revival.

Thank goodness that Edward Malnick straightened everything out.

That big fat Jesus medallion worn by Dr. Richard Chartres, Bishop of London, best pal and Cambridge University chum of Prince Charles, and a fellow environmental activist always worrying about carbon footprints and the like, is called a "morse." It is modeled on an 11th century mosaic from a Greek Orthodox Church in Dafni, Greece, which shows Jesus as "Christ Pantokrator," with the arms and top of the cross appearing to extend from Jesus’s head, like a halo. "Pantokrator" is thought to come from the Greek words meaning "Creator of All" or "Omnipotent." It is a designation used for God. When used with "Christ," it indicates Christ as the judge of all humanity. On the morse, in his hands, Jesus holds a closed book representing the Gospels. The Bishop’s big, fat medallion measures a mere 9 inches across-- small for a "morse," which ordinarily is 18 inches in diameter.

But if it were 18 inches wide, well, that would be a super-big fat medallion, like the one the rapper Raekwon sings about being "Sherlock Holme’ kangols, medallions so big, attach strings, you can turn ‘em into banjos."

Unlike Rapper Cappadonna’s big fat medallions, which appear to be made of gold and/or gold-like metals, Bishop Chartres’ big fat medallion is made of colored silks embroidered into a gold lame background. But big fat Jesus medallions worn in the presence of royalty are well-known to famous rappers like Kanye West, who has...sang or rapped or whatever:

"From the Polo fleece to the Jesus piece/I got family in high places like Jesus’ niece."

And Christ Pantokrator transcends race, even evolving into rapper-witticisms like:

‘Ye even has his own black Jesus medallion for God sakes, pardon the pun."

By comparison, Bishop Chartres’ big fat Jesus medallion is a modest proposal. The morse was created especially for the Bishop by Jacquie Bins, a creator of clerical garments. Chartres wears it in front because it acts as a clasp that holds his robes together.

Well, I can understand that! I mean, who needs a Duchess of Cambridge-like wardrobe malfunction in front of the Queen!

They have flames embroidered upon them.

Whoosh! Flames! As in, on fire.

I wonder if the Church of England hymnal contains anything close to Kanye West’s take on that:

"Did Moses not part the water with the cane?

"And ran to Jacob, and made the new Jesus chains?

And yes, I did leave out a few other more slangy, physiological references.

Flames on the Bishop’s robes....

That’s for the Holy Spirit. And Pentecost is right around the corner!

One wonders whether Kate and William have a deep awareness of that. Maybe their crotch-filled boozy limousine stretches and naked-body worshiping of the sun on the chateau balcony in the South of France can resonate with some of Kanye West’s other rapping stanzas:

"Shake that body, party that bod!

"Shake that body, party that bod!"

After cohabiting for a decade before their showy white wedding, the Cambridges don’t seem to be dedicated, church-going types. Will Kate join the Altar Guild? Or Daughters of the King? Call the Cambridges’ "me"-centered take on religion-light the Kanye West catechism:

"I believe there’s a God above me, I’m just the god of everything else."

Kate’s last-minute confirmation in the Anglican Church before the royal wedding was done on an emergency basis, just prior to the marriage, and it was a rush-rush hush-hush "secret ceremony" according to The Telegraph. It was odd that although Kate had dated the heir to the heir to the Present Defender of the Faith for a decade, nobody realized that Kate’s churching had begun and ended with her baptism at age five months. And because the Church of England has a few rules (not as many as the Roman Catholic Church, but a few, nonetheless), they couldn’t just go down to Westminster Abbey like it was a wedding chapel in Las Vegas, could they? No! And who performed that "secret ceremony" that officially brought Kate Middleton into the Anglican Church as an adult Christian? Why, none other than Bishop Richard Chartres!

And where, pray tell, did that "secret ceremony" take place?

St. James Palace’s Chapel Royal, right where the late Princess Diana had previously lain in state, and right where little Prince George was baptized before, oh, a whopping big crowd of...29 people.

We don’t know, silly! It was a rush-rush hush-hush secret ceremony!

Anyway, the topmost Anglican clerics seemed to think that there is some deficiency in the Cambridges’ understanding of Christianity as a religion based upon Jesus Christ because both William and Kate (along with the chosen and much-hyped godparents) were admonished repeatedly during the ceremony to be sure to tell little Prince George "who this Jesus is. Speak of him, read stories about him. Introduce him in prayer. Help him to grow and flourish into the person God has created and has called him to be."

These instructions were spoken by the Archbishop of Canterbury (the number one Anglican cleric). But just to make sure William, Kate and present company of godparents understood, Bishop Chartres carried on his chest a big, fat Jesus medallion that they could not easily ignore. Prince Charles, who once said he wanted to be known as the "Defendant of Faith" rather than the Defender of the [Anglican] faith when he becomes king, surely saw his good friend’s glittering, gold lame Christ Pantokrator in festive satins and silks staring out at him. Who could not? And Prince William and Kate Middleton, who have evinced a liking for sport but not much enthusiasm for the state religion that could one day place them on British thrones, may well want to play a rap song by the aptly named rapper Wale, that cries out to Jesus and the Church established in his name with lyrics like:

"Preaching Armageddon while collection plates been circling the room

"Fear’s but a tool

"And the workers in the pulpit want they blessings to improve."

And then, the hook comes: