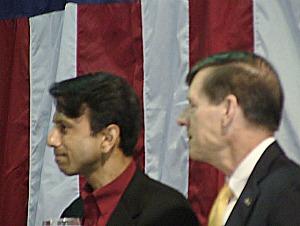 Based upon a just-released poll by recent Southern Media and Opinion Research (SMOR), Louisiana Governor Bobby Jindal has the most favorable numbers of the major statewide elected officials, yet, as he enters his second term, he faces a frustrated state giving him a mixed report card for his past four years.

While Jindal beats David Vitter, John Kennedy, Mary Landrieu, Jay Dardenne (and Barack Obama who is included) in favorable scores, over 66% of those answering the poll said conditions were the same or getting worse and over 43% gave the Governor a C, D or F.

Below are relevant results from the poll by Bernie Pinsonat and SMOR and paid for by Baton Rouge businessman Lane Grigsby:

Click here to read about the poll results related to education