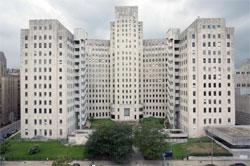 There are many projects in the air in mid-city and downtown New Orleans including the substantial University Medical Center , the controversial development of the World Trade Center by the Mississippi River and Canal Street and possible plans for the Charity Hospital building—vacated after Hurricane Katrina.

One of the persons covering these issues has been Tyler Bridges of The Lens.

In part one of a multi-part Google Hangout interview with Bayoubuzz publisher Stephen Sabludowsky and former lawmaker Jim Brown, Bridges discusses the checks and balances on the financial arrangements for major projects like these, the access or lack of access to public records, the new law that expands the access and the control over the buildings by state government, particularly by the Governor Bobby Jindal administration.

According to Bridges, the access to the public records has been made easier by a recent law passed in the latest legislative session; however, there are still major roadblocks in obtaining information from those individuals who set out policies and legislation to do the opposite.

More in this category: « Louisiana Landrieu Says She Has Helped Secure 3B For NASA; Would Help With Michoud Jobs Melancon Touts Poll Claiming Dead Heat Against Vitter In Louisiana Senator Election »
back to top