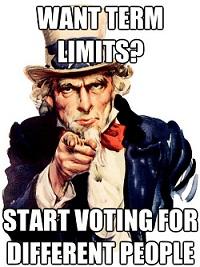 The dysfunctional government situation that exists today in the U.S. Congress has American voters saying, “Throw the bums out.”

Trick or Treat?
Appropriately, it happened on Halloween.  The much anticipated endorsement by the Senate Conservatives Fund (SCF) in the Louisiana U.S. Senate race turned out to be a treat for Rob Maness, the Republican candidate from Madisonville.
It turned out to be a scary situation and another trick pulled on U.S. Rep. Bill Cassidy, the Republican from Baton Rouge, who is the GOP’s anointed candidate in the upcoming race against incumbent Democratic U.S. Sen. Mary Landrieu.
Maness, a retired Air Force colonel, has managed to pick up the endorsements of almost every Tea Party organization and Republican conservative group, leaving Cassidy basically empty-handed.
The SCF vets candidates throughout the country – including both incumbents and challengers – and issues endorsements based upon a number of criteria, one of which is “can the candidate win?”
In a fundraising e-mail, SCF warned voters to beware of Cassidy.  “Bill Cassidy has rightly been criticized for his Obamacare hypocrisy.  Not only did Cassidy propose an Obamacare-lite plan in the state legislature, he’s also tried to take credit for federal grants awarded through the Obamacare program.  All of this is making it harder for him to contrast himself with Democrat Mary Landrieu.”
SCF’s Executive Director Matt Hoskins went on to point out that Cassidy has, in the past, contributed to Landrieu’s campaign and that he is not entitled to be the Republican who faces Landrieu.
The big problem for Maness is money.  But SCF’s endorsement could help the underdog candidate raise needed campaign funds.  As ofSeptember 29, he had collected only $102,000 in contributions.
The in-fighting in the GOP is the best thing Landrieu has going for her, some political analysts contend.
So far, that seems to be the case, as some GOP state legislators are talking about entering the race.

McAllister nabs Mayo
Political unknown Vance McAllister is looking more and more like he is going to give state Sen. Neil Riser a run for his money in the runoff for the 5th Congressional District seat.  The election is Nov. 16.
He has picked up the plum endorsement of Monroe Mayor Jaimie Mayo, the African-American Democrat who finished third in the primary with 15% of the vote.
When you add Mayo’s vote in the primary to the total McAllister received, which was 18%, the race is pretty much even.  Riser garnered 32% in the primary.
You can bet the farm that Riser wanted Mayo’s endorsement.  But after he didn’t get it, his campaign was downplaying the importance of a Mayo endorsement.
Riser spokesman Ryan Cross said that the state senator and Mayor Mayo don’t share the same political views.  No kidding.  But it’s a good bet the Riser camp would have been touting Mayo’s endorsement if it had received it.
Instead, the Riser camp was bragging about getting the endorsement of the National Rifle Association (NRA). No surprise there because the national Republican Party is supporting Riser.
But McAllister may have a more powerful group behind him – the Duck Dynasty stars.  Phil Robertson, one of the stars of the popular reality show, is a close friend of McAllister’s.
Riser is a Republican from Columbia.  McAllister, also a Republican, is from Monroe, one of the population centers of the 24-parish Congressional District.
Another populous area is Rapides Parish, the home of former U.S. Rep. and current Public Service Commissioner Clyde Holloway.  He finished with 11% of the vote in the primary and is expected to also endorse McAllister.
Mayo, who is highly regarded by blacks and white Democrats in northeast Louisiana. said he would be active in helping to get out the black vote for McAllister.
Among the registered voters in the district, 33% are black and 50% are Democrats.
Riser, meanwhile, is counting on big bucks from former U.S. Rep. Rodney Alexander, Gov. Bobby Jindal, GOP members of the Louisiana U.S. House delegation, and the national Republican Party.
Alexander resigned his 5th District seat in September to become Secretary of the Louisiana Department of Veteran Affairs.
But, as one political analyst put it, don’t under-estimate the popularity of the stars of Duck Dynasty.  They could very well decide who wins this

Seabaugh on U.S. Senate race
Republican state Rep. Alan Seabaugh, who represents Shreveport’s House District 5, created quite a stir recently when he publicly said he was giving consideration to entering the U.S. Senate race.
It was a development first reported by the Fax-Net  and later picked up by other news media outlets.
He drew the ire of some GOP loyalists who are struggling to make the political road easy for U.S. Rep. Bill Cassidy, the party’s anointed candidate to oppose incumbent Democratic U.S. Sen. Mary Landrieu.
Cassidy is already getting grief from another GOP candidate, retired Air Force colonel Rob Maness, who  is sopping up endorsements from Tea Party and other conservative groups.
The Fax-Net received the following statement from Seabaugh on Sunday night.  We publish it here in its entirety.
Seabaugh’s Decision
“Since my name was first mentioned as a possible candidate for U.S. Senate, I have received a tremendous amount of encouragement and support from all over Louisiana and around the country. From the beginning, I have said that I would throw my hat into the ring if  that is what was best for Louisiana and my family.
“What is undoubtedly best for Louisiana is ensuring that Mary Landrieu no longer represents us in the U.S. Senate. Her unwavering support for Barack Obama and his destructive policies has been devastating to many Louisiana families.
“From casting the deciding vote in favor of Obamacare, to voting to take away the rights of Louisiana gun owners and her attacks on the unborn, Mary Landrieu has proven that she does not share the values of most Louisianians. For these and countless other reasons, I am committed to her defeat in 2014.
“U.S. Congressman Bill Cassidy has already announced as a candidate to replace her in next year's election. During his tenure in the Louisiana Senate, as well as the U.S. House of Representatives, Congressman Cassidy has been, if not quite a staunch hard-line conservative, at least a solid Republican vote.
“In recent weeks, Bill Cassidy has proven something to me and fellow conservatives. He stood with those of us who care about the future of this country by not giving in to President Obama and the liberal big spenders in Congress.
“This particular stand was important to me, as a conservative. It showed that Bill Cassidy will fight alongside Sen. David Vitter for serious reforms to our spiraling national debt and do all he can to end the Obamacare debacle playing out in front of the nation's eyes.
“At this point, the entering of another Republican candidate into the U.S. Senate race would serve only to divide Republicans and conservatives at a time in which we need to all be working together to rid Louisiana and the U.S. Senate of Mary Landrieu once and for all.
"Accordingly, I will not be a candidate for the U.S. Senate next fall.
"I support Bill Cassidy's run for U.S. Senate and believe all Louisiana Republicans should unite around his effort to take our Senate seat out of the hands of an entrenched Washington insider and return it to the people of Louisiana so that our values, not Barack Obama's, will be represented.”  (End of statement)
So a potential obstacle to Cassidy’s campaign has been removed with the exit of Seabaugh.  However, some other Louisiana state legislators are still taking a look at the GOP situation and are making noises about possibly entering the race.
These legislators – and other members of the Republican Party – fear that Cassidy is not conservative enough to defeat Landrieu, who has won three close races in a state that has become increasingly red.
As mentioned earlier is this issue, the influential Senate Conservatives Fund, after vetting Cassidy and Maness, has endorsed Maness.  That development could bring in needed campaign funds for Maness from around the country.