It’s always nice to get an email from my friend, David… 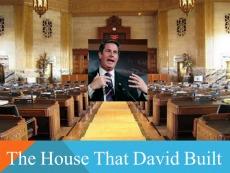 “This week, I was honored to deliver the keynote address at the Pelican Institute for Public Policy's workshop and orientation for Louisiana legislators before the beginning of the next legislative session.

I told them that this brave, new world of Republican majorities in both bodies of the legislature and in the Governor's mansion seems like only a fiction when I reflect on my days in the legislature.

Back then, conservative reformers like me were a very small number.

I firmly believe that conservative reformers have an important opportunity before us. We need to put forth bold reforms to education – like drastic changes to teacher tenure – and fiscal stability, like ending the Baton Rouge budget games of using one-time money to band aid the state budget.

We also need to get out of our comfort zone and consider boldly changing our state tax system and I think they can start immediately by phasing out the income tax for Louisiana residents over the age of 65 so we can make Louisiana a desirable retirement destination.

These are just a few challenges that require courageous, bold policy changes.

Like I try daily and relentlessly while representing you in the U.S. Senate, our new Republican leaders in state government need to earn the majority you've given them. I hope you'll join me and them to act now and tackle Louisiana's biggest challenges boldly.

If you have not noticed, Senator Vitter appears to love the word “bold” (which I have boldly emphasized above).

In fact, he used that very word when endorsing Bobby Jindal for Governor when he made the left-handed endorsement of Jindal’s candidacy earlier this year.  Back then, you remember, Vitter said, “to help Bobby become as engaged and bold as possible in his second term, we need a more conservative legislature, particularly in the State Senate.”

Which raises the question—why the email?  Why the emphasis on “bold”?

A logical answer would be that Vitter spoke this week at a leadership conference and sent out an email to his constituents to reinforce his beliefs and just happened to use the word “bold” for his own emphasis.

Another possibility is this…David Vitter is reminding his followers that he is relevant, that he is the Republican leader, that he had to scold Governor Jindal about being “bold” and that he could be a candidate for Louisiana Governor.

This theory gains greater weight when considering a new poll this month.

Dardenne rated 47.1 % favorable and 19.2% with a whopping 33.8% not familiar, don’t know or wouldn’t say.  These numbers come after a heated election for the second spot against Billy Nungesser.

Kennedy received a 56.8% approval and a 14.4% disapproval with a sizeable 28.8% that did not chime in for one reason or another.

Those numbers puts him in good company with one of his favorite persons, President Barack Obama who had 13.2% call him “excellent” compared to 40.6 rating him “poor”, thus roughly 1 to 3 ratio, too.

To put the numbers in perspective, Obama had a “stratospheric” 38%  favorable and a 61% unfavorable percentage which, for him, could be great numbers in this “Reddest of the Red states”, Louisiana .

Senator Mary Landrieu, the leading Democrat in the state who became a target for conservatives after her healthcare vote has a respectable 51.7% favorable and 43.3 unfavorable percentage.

Which means, for now, David Vitter, who creamed his opponents President Obama and Charlie Melancon last year is doing slightly better than Mary Landrieu but within the proverbial margin of error despite Louisiana’s strong conservative lean and the scorn of those blaming her for the most recent “Louisiana Purchase” and her “liberal” votes.

So, what does this all mean with Vitter’s next election fundraising period (whether for U.S. Senate or perhaps Louisiana Governor) now coming near?

In my view, with these numbers, David Vitter would have a tough contest against Dardenne, Kennedy and perhaps other Republican candidates should he decide to step into the gubernatorial red-carpet run.

Should President Barack Obama not prevail next year, Vitter arguably becomes less influential as a U.S. Senator, as he would not have the Obama-bag to punch around.  No Obama could make Vitter’s run for that federal  and even the state spot more competitive..

So, Senator Vitter  would be wise to remind Republican legislators and the public that he stands for “bold” conservative policies and that he is, in part, responsible for the Republican revolution in Louisiana over the past few years. By doing this, David Vitter can continue to help shape the state’s political and legislative landscape over the upcoming months, or at least say he is doing so.

Which is also why I believe David will continue to send us e-mails urging us to be bold as he considers his next move among the cast of the Louisiana Politically Bold And the Beautiful.

More in this category: « Jindal's parked tax reform now runs out of gas in House Raw videos of Boston Marathon bombings, explosions »
back to top