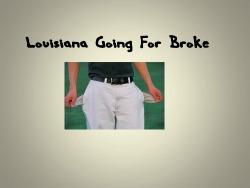 Has the final shoe dropped on Louisiana insurance policyholders who are seeing their insurance costs skyrocket, and who continue to pay the highest insurance costs in America?  Can it get any worse?  Well, I hate to tell ya, but yes it can, and it will.

Louisiana representatives at several levels of government are scurrying to cover themselves from mounting criticism of these rapidly rising insurance rates.  In almost every area of insurance coverage, the Bayou State leads the country with the highest costs and the greatest increases.

The rising cost of insurance premiums has driven a number of companies out of Louisiana in recent years.  But now, the cost for all types of insurance has grown so dramatically that the average family is being forced to consider whether they can continue to live in the deepest of the deep southern states.

Obamacare has become a major embarrassment and detrimental campaign issue for Senator Mary Landrieu.  She is in the fight of her career in her efforts to be re-elected in 2014, and now, all the problems with its implementation have ensnared her in a shower of criticism.

When Obamacare was implemented, Landrieu told her fellow senators — “Those individuals who like the coverage they already have will be able to keep their current plan. This is a very accurate description of the bill before us.”  Now we find out that this is not true. Also, she is bogged down defending a program that can’t even get the computers up and running.  The senator will be facing some tough questioning by her constituents right up to next year’s election day.

Her main Republican opponent, Congressman Bill Cassidy, has his own problems, being criticized by a much more conservative Republican candidate, Colonel Rob Mannes, for having proposed “Obamacare Light” when he was a member of the Louisiana State Senate.  Manes has strong Tea Party support and he will no doubt keep Cassidy on the defensive in the months to come.

Then there’s the property insurance debacle that has caused so much hardship on so many Louisiana property owners.  Every member of the current Louisiana congressional delegation as well as state insurance officials were caught off guard by their failure to oppose federal legislation that will cause a massive increase in the cost of flood insurance for Louisiana property owners.  Some premiums have been pegged by the news media to increase by as much as 3000 percent.

The members of congress were caught napping and let an extremely damaging law slip through the cracks.  A last ditch effort by Gulf Coast legislators to delay implementation of the new law has been an uphill fight since it’s being strongly opposed by the insurance industry.  You see, insurance companies handle claims that are made on a percentage of the premium charged, so the higher the premiums, the more the insurance company makes.

If you live in a Louisiana flood zone, get ready for a big jump in your insurance costs.  Every property owner will also get stuck with continuing assessments because of the outright negligence of Citizens Property Insurance, the state-run company that’s been a finance disaster for the state from day one.  Several recent court decisions will force the state fund to pay out close to $150 million in damages for failing to pay claims due after hurricanes Katrina and Rita. Since they do not have the money in reserve, guess who will have to pay? Private insurance companies paid their claims on time.  But the ineptitude of the state run company will cause Louisiana owners to get stuck with the $150 million tab.

Property insurance rates charged by private companies ought to be decreasing.  And they are in many states. HomeonwnersInsurance.com reports that the average home insurance policy nationwide is $875, and has dropped since 2012. And it makes sense. After all, there have been no major storms in years, and the cost of re-insurance bought by insurance companies has been steadily dropping.  A national publication, The Insurance Insider, reports that home insurance “rates are down on an average of 15-20 percent.”  Yet in Louisiana, rates continue to rise and are more than 10% higher than the cost in Florida.

How about auto insurance costs. Any good news there?  Nope!  The New York Times reported earlier this year that Louisiana continues to lead the nation in having the highest annual premiums at $2,700. No other state in the South comes close. If you live in industrialized New Jersey, the cost is $1,697.  In New York, on average, you would pay only $1,369.

Is there anything Louisiana elected officials can do about these soaring costs?  Of course.  First, begin talking about this serious problem.  In the past few years, in Louisiana, virtually no public officials, from members of congress, the Governor, the legislature, or the insurance department, have confronted the problem.  Property and auto rates have no pre-approval like they are required to have in most other states.  Companies can charge pretty much whatever they want.

A serious study of other states with lower rates will determine a host of suggestions that could lower insurance costs in Louisiana.  I’ve written extensively about what common sense solutions should be put in place in past columns, and I will offer a litany of suggestions in the near future.

But when all is said and done, it comes down to commitment.  Where there’s a will, there’s a way.  Right now, there doesn’t seem to be much of a will by the elected officials who could make a difference.

“Do you know what happens when you give a procrastinator a good idea? Nothing.”

Jim Brown’s syndicated column appears each week in numerous newspapers throughout the nation and on websites worldwide.  You can read all his past columns and see continuing updates at http://www.jimbrownusa.com.  You can also hear Jim’s nationally syndicated radio show each Sunday morning from 9 am till 11:00 am, central time, on the Genesis Radio Network, with a live stream at http://www.jimbrownusa.com.