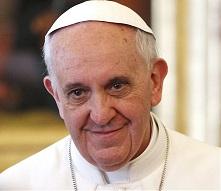 Last week, Pope Francis released his first encyclical, which included a strong denunciation of capitalism. The Pope labeled “trickle down economics” a major failure. He claimed that the poor have been left out by rich capitalists and that a more equitable system focusing on economic justice was necessary to combat poverty.

Turkey of the Year--click here to read article

In other words, Pope Francis was advocating socialism or Marxism, two systems which have failed miserably worldwide. In fact, the Argentine Pope only has to look at what his happening to the north of his native country. In Venezuela, a socialist dictator, Nicholas Maduro has continued the failed policies of Hugo Chavez. The result has been a total disaster for the poor people ofVenezuela.

It is so bad in Venezuela, that there is a shortage of basic items such as toilet paper, newspapers and magazines. To address the continuing economic problems, Maduro addressed the nation last night. However, in the middle of his speech, a power outage disabled 60% of the nation.

How ironic and appropriate that the outage occurred as the President was issuing more decrees against the country’s diminishing private sector. It was similar to a major power outage that occurred in early September. Instead of taking responsibility for these embarrassments, Maduro hinted it was some sort of sabotage by his political opponents.

In reality, the socialist government is always looking to shift blame for their failures. The Maduro administration is riddled with corruption and incompetence. It is clear to any objective observer that socialism does not work. Hopefully, one day, Pope Francis and other liberal Catholic leaders will get the message.

Maduro’s failed policies include a ridiculous campaign to regulate prices on items such as used and new cars.  He wants to limit salaries and shrink private sector profit margins. Maduro has also used the military to take over major outlets selling electronic goods.

In total, these actions continue to limit freedom, all in the name of helping the poor. However, the result will be just the opposite as there will be more economic woes as the government expands their control.

In a country with the world’s largest crude oil reserves, Venezuela has rampant poverty and expanding economic misery. The socialist policies have resulted in a declining currency, a 54 percent annual inflation rate and a scarcity of basic necessities. While Maduro keeps demanding that his citizens save more and consume less, his government continues to grow.

In a country with massive rivers and hydroelectric facilities that generate power for two-thirds of the population, blackouts are now becoming routine, especially since the government nationalized this sector in 2007.

For the past 15 years, socialism has been tried in Venezuela. The result has not been beneficial for the poor, the middle class or the rich as shortages, blackouts and economic misery have gripped the country.

For all its faults, capitalism and “trickle down economics” is a much better model for prosperity for all citizens. It worked during the 1980’s in this country and led to the creation of over 20 million new jobs. It worked in other countries throughout the world, including Chile.

Obviously, Pope Francis has the best intentions, to help the poor and the powerless. Sadly, his recipe for success will only lead to more poverty, unemployment and hunger. For evidence, the Pontiff just needs to look at the disaster unfolding in Venezuela today.