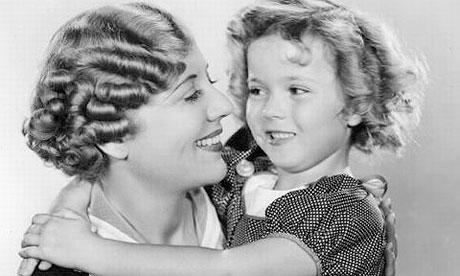 The biggest child star in history passed away last night. Shirley Temple Black died at the age of 85, surrounded by family.

As the star of 57 short and feature length films, Shirley Temple mesmerized America with her cute looks, her singing and dancing and her ability to cry on cue. Her films helped Americans deal with the ugliness of the depression and escape the harsh realities of their lives. In Shirley Temple movies, there would always be a happy ending, just what the country needed during that difficult time period.

She was so famous, a drink was named after her and countless fan clubs were formed around the world. There were also millions of Shirley Temple dolls, dresses and dishes. Eventually, Shirley Temple grew up and at the ripe old age of 22, she retired from acting.

In her personal life, Shirley Temple was married for over 50 years to her second husband, Charlie Black. She was also a mother of three, a grandmother and a great grandmother.

In 1967, she moved into public service, by running for Congress in California as a Republican. Two years later, President Richard Nixon appointed her to the U.S. delegation to the United Nations. She also served as the United States Ambassador to Ghana from 1974-1976 and was tapped for her most prestigious position as U.S. Ambassador to Czechoslovakia from 1989 to 1992.

Throughout her story life, Shirley Temple epitomized the American dream. She served her country with distinction as an actress, diplomat and role model.

Shirley Temple conducted herself with class and style, with none of the high octane antics that today’s stars display.  Shirley Temple was a good girl who stayed good. She did not have to turn into a sex crazed sleaze, posing provocatively on screen and engaging in scandalous behavior.

Unlike the misguided stars of today, Temple was not arrested for illegal drugs or driving while intoxicated. She did not cause a scene by getting into a fight at nightclub or at a party. Throughout her full life, Shirley Temple set a good example for Americans, both on screen and off.

When she retired from films, she just moved on and did not try to extend her career by some type of racy, inappropriate role. Compare Shirley Temple to the twerking, sexualized young stars of today like Miley Cyrus and Britney Spears, who both felt the need to shed their “good girl” image as quickly as possible.

In contrast, Shirley Temple’s image was never tarnished. She showed Americans that there are many ways to make a positive impact, not just as a “star.” For her talent on screen and the inspired way she lived her life, Shirley Temple will be sorely missed.