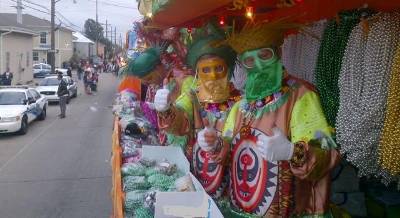 Bacchus Bash, the day-long party preceding the Bacchus parade, has announced its 2014 musical lineup. The celebration takes place the Sunday before Mardi Gras (March 2) at noon in Generations Hall. The party will feature these bands: The Top Cats, Category 6, Flow Tribe, VH1 Celebrity DJ Brian Dawe, DJ Ronnie Roux, DJ Wixx, and DJ TAF. The outdoor part of Bacchus Bash is free and open to the public. However, a VIP ticket costing $100 gives patrons access to the indoor party and a grandstand for parade viewing, private rooms and bathrooms, an open bar, and free food.

Today, the 59th Greater New Orleans Science and Engineering Fair (GNOSEF), in which nearly 300 middle and high school students from New Orleans, Jefferson, Plaquemines, and St. Bernard parishes display the results of their scientific inquiry, opens at UNO. According to a press release, GNOSEF “encourages independent student research in science, technology, engineering, and math.” Winners will be awarded with more than $25,000 in cash and prizes. Selected winners will proceed to the Louisiana Science and Engineer Fair at LSU in Baton Rouge in March and then possibly to the International Science and Engineering Fair in Los Angeles in May.

The project setup will take place today and the judging tomorrow. On Thursday, the public can view the displays in the Human Performance Center at UNO. Thursday's display is free and open to the community.

On February 25, New Orleans BioInnovation Center will hold a seminar on issues faced by early- to mid-stage structuring relationships with partners or acquirers. Mark Graffagnini, the founder of the business-focused law firm Graffagnini + Associates, will give a presentation covering issues related to corporate venture capital and its comparisons to "institutional venture capital"; partnership structures; and merger/acquisition issues and structures. Participants can RSVP on www.neworleansbio.com

On February 25, the Greater Lafayette Chamber of Commerce is hosting Louisiana Association of Business & Industry (LABI) Legislative Issue Breakfast from 7 AM to 9 AM at the Petroleum Club on 111 Heymann Blvd in Lafayette. Admission is $25 for LABI members and $40 for non-members. LABI President Stephen Waguespack will share the organization's priorities and vision for the 2014 legislative session.

On March 12, LABI holds its annual chamber banquet, starting at 6PM, at the Cajundome Convention Center in Lafayette.

The Louisiana Garden Club Federation holds its Annual Cleanest City Contest in April. Lafayette has won in their category for the last two years. Lafayette residents are now encouraged to help clean up the city so this feat might be repeated.

Spire Square is hosting a Business after Hours on February 27, from 5PM to 7PM, at 128 Demanade Blvd in Lafayette. Admission is $2 for Chamber members and $5 for general admission.

The U.S. Small Business Administration (SBA) is hosting a Twitter chat on February 19 from 3PM to 4PM. The goal is to help aspiring business owners turning good ideas into profitable ventures.

The Greater Lafayette Chamber of Commerce Public Education Policy Division held its first meeting on February 6. Throughout March, the division will work with partner organizations to host round table discussions designed to build consensus around important pre-K -12 issues.

On May 12, the Louisiana Economic Development Authority (LEDA) hosts their 19th Annual Job Fair from 9AM to 3PM at the Cajundome Convention Center in Lafayette. The fair connects Louisiana employers with thousands of job seekers.

Ewell Smith, the former leader of Louisiana's state seafood board and now Interim Executive Director of Gulf Seafood Institute, said he is excited to be involved with the Gulf fisheries again. According to Gulf Seafood News, GSI's mission is to "protect the Gulf's unique culture and environment while elevating the Gulf's seafood brand with consumers, customers and policy leaders through advocacy, education and science.". Some of the challenges that face the Gulf of Mexico and its fishing communities, are, according to Smith, share allocation; H2B visa worker legislation; coastal restoration; electronic monitoring of vessels; seafood certification and promotion; and loss of fishing habitat.

In an opinion column, Louisiana State Treasurer John N. Kennedy argues that there are three things on which Louisiana liberals and conservatives should agree. First, Americans are among the most compassionate in the world. That means that the unemployed and poor should receive government help. Second, the taxpayers are paying the bill for this generosity, and they do so because they care about their less fortunate neighbors. Third, people who abuse the welfare system "should be prosecuted to the full extent of the law" without exceptions.

Unfortunately, Kennedy writes, the government often does not prosecute people who violate the welfare rules and regulations. In 2011 and 2012, for example, the Louisiana government gave food stamps to a number of people who made more than $50,000 a year; people in jail; convicted drug felons; and non-Louisiana residents. Nothing happened to these food stamp violators. Therefore, Kennedy encourages the public to tell public officials to enforce the food stamp laws and to prosecute those who lie, cheat, or steal from the government and taxpayers.

More in this category: « Landrieu's clout adds energy, but polls raise concern Nagin bust; dueling LaGOP; Vitter vs. whom, Mitch? »
back to top