Window into Kate Middleton and William: Height of Wuthering Royalty 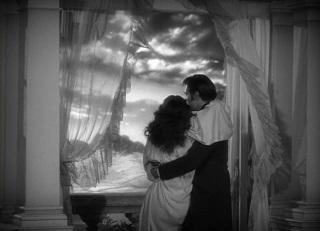 A forlorn window, newly painted a drab, dull white, with drab, dull curtains at the side, is full of ghosts.

It could be a still shot from a movie trailer for, oh, perhaps Henry James’s haunting "The Turn of the Screw." Or maybe it’s a college student’s mock-up project for what Heathcliff and Catherine Earnshaw’s ghost family looks like. Extra credit to salvage that dropping grade in Romantic English Literature.

If ghosts can have babies and dogs.

I mean, if Catherine Earnshaw can come calling for Heathcliff on the moor even after she’s dead, if she can try and come to him through the window of Mr. Lockwood’s bedroom, and then Heathcliff starves himself to death and they run off together, well, couldn’t they conceivably have a ghost baby and a ghost dog and (when not wandering around the grassy moors), live a ghost life at Wuthering Heights?

If the new Mr. and Mrs. Earnshaw could, they’d probably take a family portrait just like the one staring out at us from the pages of the Dail Mail.

A portrait where two pale and pasty faces stare out from utter darkness and deep shadow. It’s a modernesque chiarusco, done at its most haunting, and with no redeeming detail. This portrait is all about darkness visible. Nothing about it seems alive; the atmosphere is one of encroaching menace. The little ghost baby in his mother’s arms rests his tiny fingers dangerously on the sill, where the window above it could conceivably come crashing down at any moment, crushing the baby’s hand.

And the father, sitting alongside his son and wife in brownish, dank gloom, has a face which shows the layering and scars of family damaging. He too has his mouth open, bright teeth on display, but there is no smiling in his eyes, only a guarded kind of appraisal of the exterior world beyond his window frame, which we are told is a window in Kensington Palace.

Which is odd because, if you are only looking at the window, it looks a lot more like a window in an old, old hospital or nursing home, where lights are kept perpetually on the dimmest mode, for fear of stirring powerful emotions. Or like a window at Wuthering Heights, where the mist from the stormy moors and the sea just beyond obscures all bright light and casts everything in northern shadow.

The father looks more like a horse gazing out from his stall, waiting for a sack of oats or alfalfa to come his way.

Waiting for the next feeding time.  His critical and guarded eyes look the viewer up and down so that one immediately starts wondering whether to go fetch a carrot or an apple to appease the horsey royal countenance.

Next to the baby and in the arms of the father is a large dog– the only figure in this tableau that seems to possess any genuine life force at all.

The dog’s eyes are bright, but bright not with joy or obedience, but with a nervous kind of alarm.

Will the dog bite the baby? Bark at it? Take a nip off the baby’s nose? Maul the baby’s face?

The parents seem unconcerned, or utterly disconnected, to the baby and what might happen, whether it be a mashed up tiny hand or a bite to the face, or even just a loud, ferocious, high-strung bark that deafens and terrifies the child forever of dogs.

And of the little ghostly baby, we see...nothing. A chubby face in distant profile, turning away, turning almost backwards, turning toward the dog.

"Who’s baby is this?" the photo forces us to say.

The dog looks as though he senses something is wrong with his world.

The dog is the only figure not to be a ghost.

This is why the snappiness of his eyes is almost startling.

Does the dog smell something’s amiss?

Dogs can do that, you know.

The whole world of a normal dog is one of smell.

Family members known to a dog are each identified to that creature by how they smell. This is why dogs know to whom they belong. This is how dogs can even tell if an owner has a cancerous tumor–by detecting changes in the smell of that person.

This is how dogs can know who is who, and who is not.

I’d like to make some jokes and write a funny piece, but there is just nothing in this photograph that is light, or airy. It is a very strange photograph, as many of Kate Middleton and Prince William’s "family" photos often are.

Say what you want about Prince Charles and Princess Diana and how their marriage was a this and that and the other.

The one thing they seemed able to do, at least for a decade or so, was to take a beautiful joint photograph to mark their several triumphant tours, and also the progression of their family life. Who can forget their stunning photograph by Terence Daniel Donovan, with Diana in the palest pink gown with a plunging white collar? The loving photos of Diana and Charles with the infant William, full-face-forward, Diana in a shimmering soft-gold blouse with a pearl and diamond heart necklace, Charles in poses behind and beside, but the essence of pure marital connection? Or the glory of Lord Snowdon’s official photographs which performed the miracle to making Charles, Diana and their children both royal and yet deeply, personally joined with the viewer?

And at the same time, a royal family.

A royal couple delighting in their children and, for a while, in each other. A royal couple not using a baby as a prop or an accessory, but genuinely entranced by the charm of their own creation.

Not a ghost family, where no one looks alive but the dog, whose terror to be in the grasp of the ghosts is palpable in jerky position of head and the fiery brightness of his eyes.

Not a family that looks as though they are permanently ensconced in a suite of rooms at Broadmoor Psychiatric Hospital, and the dog is the only one not wearing a straightjacket!
Not the Heathcliff and Catherine Earnshaw family, waiting to haunt and harry the next hapless lessor into fleeing, screaming in the carriage all the way back to London.

If Kate Middleton and William are so utterly "normal," as they keep claiming, then why not just take a "normal" official portrait? Why all this forced sense of informality, especially since all it is communicating is deep unhappiness and unease?  And even, frankly, a ghost world?

A picture speaks a thousand words, and a photograph speaks these words loudly.
What is the latest photograph of Kate Middleton, Prince William, Baby Prince George, and the terrified Lupo dog saying?
Darkness. Foreboding. A ghostly world.
Even their own dog is scared of them.
Boo!
Tweet
Tweet
Published in Latest Buzz