How important is Vance McAllister scandal to Louisiana 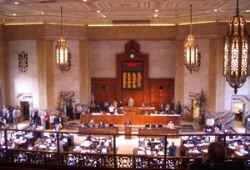 In the final part of the Google Hangout interview of Greg Hilburn, reporter for the Monroe News Star, the focus turned to the news value, the importance and the social significance of the Vance McAllister kissing Congressman controversy rocking the state and the nation.

Here is the narrative of the video interview and discussion which included Jim Brown, Lawrence Chehardy and Stephen Sabludowsky:

Brown: As we're having this conversation, I'm going down the national news feed. This is just in the last hours, and I'm going to give you some of the headlines. "Duck Dynasty Star Cancels Kissing Congressman" (ABC News). "Republicans Kiss Votes from Women Goodbye" (national news feed on a national publication). Here's one from today's Washington Post: "Politicians Don't Cheat More than Regular People; They Just Get Caught More." This is perverse, and you may not agree with this. But we've heard about all these reform Governors and all these powerful Congressmen up there in Washington. I did a story on Bayoubuzz.com today about how Louisiana has the worst drivers in the country and the highest insurance rates in America. You go right down the national list, and we still are anywhere from dead last to second or third to last in virtually every index. Someone told me today, "You know what Jim? Maybe there's nothing wrong with this? Mississippi has the same levels as we do, but we're so much more fun and interesting here. We have all these crazy folks and politicians." I saw a great cartoon that said "McAllister has put the fun back in Funroe." Monroe is not known as being lively. Just maybe, all these crazy things, such as Edwin Edwards running for Congress...if you put them all together, people might think, "That's a weird place! I want to go down there and see what life is like in Louisiana!" Who knows? Maybe there will be a backwards positive in some way.

Sabludowsky: It's a great way to promote economic development. Lawrence, you have any questions or comments?

Chehardy: It's certainly a better story when it's a high placed elected official getting caught in a situation like this. Are politicians more prone to these kinds of lapses? I don't know if they all are, but certainly it makes for a better story than the guy who owns the corner hardware store. That's why you see all this excitement and publicity. No disrespect to anybody in the news media, but the media loves it. With all the bickering going on in Washington today..every time a Democrat stumbles, the Republicans are ready to jump on top of it and make a big story out of it. The same is true when the shoe is on the other foot. We're going to have to get used to it if we're not already there. This is the state of government and politics today.

Sabludowsky: Greg, are you hearing any kind of consolidations? Are there anyone supporting the congressman at this point? Are there any local people coming out outraged?

Hilburn: The most notable person who has come out and supported the congressman is congressman Richmond, his Democratic colleague from Louisiana. He came out today and said that it was a personal matter and none of our business. That's the most prominent name to come out for him.

Sabludowsky: I heard that John Boehner actually was involved, basically saying that the congressman is going to have to make a decision. Have you heard whether or not this has gotten up that high? Are people in Washington trying to put some weight on this issue?

Hilburn: So far, none of his colleagues in Washington are calling for his resignation. They are disappointed and say that he has to make a decision soon. They are satisfied with the people back home doing the "dirty work" and putting pressure on him. So far, in any way. Until it impacts them.

Sabludowsky: Are there any other things that you've written about that we haven't talked about yet?

Hilburn: It's just fascinating. It all started when Rodney Alexander, who was what they call a cardinal in Washington, abruptly resigned without finishing his term of office. Since then, it's been quite a story. The constituency of the fifth district has had a tumultuous eight-nine months.

Hilburn: Certainly, there are rumors to that effect. But I have no confirmation of that.

Sabludowsky: We're going to do one more thing before we close this. Let's go to the prediction game. What is going to be the really big issue here locally? It's difficult for a reporter to foresee, but do you have any sense of where this story is going to go?

Hilburn: His mood seemed steadfast when I talked to him. He wasn't going to resign unless there was some outcry. He didn't confirm that he was going to run again. He could announce that he'll finish the term but not run again. Then, the story would go away because he would be done. Until he resigns or says that he won't run again, the story keeps building.

Sabludowsky: That could be a really good compromise for everybody involved. Jim, what's the big story here?

Brown: I think the big story for the overall observers is that here we're sitting in a state that's 50th when it comes to terrible drivers; we're at the bottom of almost every list. We have a legislator who will not focus on anything substantive in terms of the quality of life of the people he represents in Northeast Louisiana, as well as the rest of the state. We have all these massive problems, and what are we focusing on? The peccadillos of a congressman that have been going on for a week and will continue to go on and on and on. I have a fair amount of disgust. It's fascinating initially, but people are saying, "Is this all we have to talk about? Are our lives so dull, and do we have so little hope about the future of living in Louisiana that this is the biggest focus we have?" It's serious. The guy was unfaithful to his wife and should probably step down. But should this be this ongoing national story that leads every news source in America to what's happening in little Monroe in Louisiana? That's the story.

Chehardy: I'd like to pick where Jim left. We do have a lot of problems. Today in this country, we have two political parties that just can't seem to sit down together, work through issues and problems, and pass legislation that is beneficial to this country. We are at polar opposites with Republicans and Democrats. Republicans are way to the right, and Democrats are way to the left. People of this country and this state are the losers in that because nothing good is being done. With regards to this scandal and what is going on - yes,  it's a news story. Should we focus on it for the next nine months? No, I don't think so. Is it an issue in that congressional district? Certainly, if the congressman decides to run for reelection, it would be. Is it really critical that people in Montana know every single day what's going on? I don't think so. We do have our priorities somewhat screwed up. This could end up being another example of our messed up priorities. We're more interested in people's sideline activity than what they are doing to benefit the people of the district. I don't think it's something that Washington is going to lose a lot of sleep over. This is not a congressman who took a bribe, for example; that would be something they ought to be concerned about. But it's not that. Let's hope this plays out rather quickly and that we can try to focus on what's truly important instead of what's entertaining.

Brown: Greg, I think you should sit down with the Chamber of Commerce and say, "Look, let's run advertisements that say "Come to Funroe! We really live a wild life up here!" Maybe you guys can make some money up there!

Sabludowsky: Yes, we have to do something about economic development in this state, and that would be a great way. It's not a big story, although we're making it one. But I think it's a big issue. The big issue, politically, is that it's going to have an impact on the Governor's race. Why? Because a lot of people in both parties who are going to seize on this and start taking sides. The person in the middle is Sen. Vitter. That is where this is going to play out. In my view, it's time for us to put an end to these kinds of scandals. I respect that the Republican Party has come out and asked for his resignation. I just think it needs to be consisted. I think the Democratic Party should do this, too. Take the congressman Weiner situation. We have to set an example for our children. When we have these things going on, it affects how we're viewed by our children and the rest of society. I applaud the Republican Party; I just think they need to be a lot more consistent.

Brown: I disagree with you. I agree that it was a terrible thing, but on the other hand, we have a system in this country. We have the big money interest that runs this country and buys this country. Millions and millions are going to be spend in the US Senate race. We've lost control of our issues. If I was still living in the fifth district, where I lived for years and I represented. If I was voting up there, I would say, "We've got some problems. Let me tell the rest of the states and the rest of the country. Let us decide. State Republican Party, you guys down in New Orleans, don't tell us what to do and not to do! Leave us alone! We'll make a decision on this guy. Quit telling us what to do. Let us make our own decisions about keeping this guy or not."

More in this category: « LAGOP, Vitter on political hotseat due to McAllister scandal Pinsonat: Jindal will campaign nationally and La. polls will likely drop »
back to top