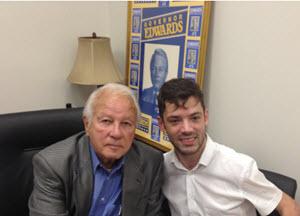 With former Democratic Louisiana Governor Edwin Edwards running for US Congress in a conservative district, a question in many minds is whether the reddening of the State of Louisiana, since his last election, would force Edwards to moderate his views.

Edwards is running against a pack of Republicans in an open primary, so, the probabilities are he will run first, only to be bested during the December runoff when he goes head-on against the top contender.

Blogger Lamar White Jr. of Cenlamar, has recently published an interesting interview he conducted with Edwards in which White asked Edwards his views on some of the top issues facing the state and nation--abortion, medicaid expansion, reducing public school funding and more.

Here is a taste of some of the responses, which indicates that Edwards and his Republican opponent will have plenty to discuss come debate season:

PUBLIC SCHOOL FUNDING
I think that any time you take away money that’s supposed to be for the public school system and give it to the private system- unless it directly goes to the student, like transporting the student to school- then I think you’re not only violating the Constitution, I think you’re doing damage to the public school system. And ultimately, if you continue to chip away from it, it’s going to fall under its own weight.

I don’t think that government bureaucrats ought to tell a woman whose been raped or whose been impregnated by incest or whose life is in jeopardy that she has to bear the child. That’s a decision that she and her doctor should make it in her own best interest.

It’s one of the worst decisions he’s made. We have 300,000 people in Louisiana- children, old people on fixed income, people who are unemployed or underemployed who cannot afford hospital services, and with a signature on a piece of paper, he could put those people in a health care system, paid for completely by the federal government for three years and up to 95% thereafter, at no cost to the state.

Read the entire interview on CenLaMar.com

More in this category: « Landrieu-Cassidy tie, Vitter leads, Mayo not on hold Iraq uprising refuels debate over Bush, Obama demonizing and blame »
back to top