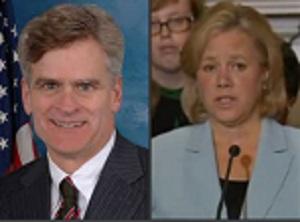 While the campaign finance totals have not yet been posted on the Federal Elections Commission website, we do know this:
Landrieu raised $2.1 million in the second quarter of the year (April-June), bringing her total for the election cycle (since her last election) to $13.5 million.
Republican U.S. Rep. Bill Cassidy, her main challenger, raised $1.6 million in the second quarter, giving him a total of $8 million for the election cycle.
The Fax-Net will report the details of money raised and money spent, including for Republican candidate Rob Maness, once they are officially posted.
The money eventually spent on the 2014 U.S. Senate race will be astronomical, when you add candidate spending and outside spending.
In the 2008 Senate race, Landrieu spent $11.4 million in defeating Republican John Kennedy, who spent $4.8 million. Those amounts are from just the candidates’ own campaign accounts and do not include what outside forces spent.
Those totals are just for the primary because Landrieu won in the primary with 52% of the vote. Of course, if there had been a runoff, those totals could have likely doubled.
For this 2014 Senate race, Super PACs and other outside groups for both parties have already poured millions of dollars into political ads for the candidate they are supporting.
We will have an update on how much has been spent so far on this race in next week’s issue.

Can anyone beat Clinton?
A new Rasmussen poll reveals that Democrat Hillary Clinton would likely beat every potential Republican candidate if the election were held today.
Here are the poll numbers:
Clinton 50%, Texas Gov. Rick Perry 36%.
Clinton 50%, Texas Sen. Ted Cruz 37%.
Clinton 47%, New Jersey Gov. Chris Christie 33%.
Clinton 47%, Florida Sen. Marco Rubio 36%.
Clinton 46%, Kentucky Sen. Rand Paul 39%.
Clinton 45%, Ben Carson 38%.
If Louisiana Republican Gov. Bobby Jindal is the GOP presidential candidate, Clinton would beat him in his home state. A new poll by Public Policy Polling shows Clinton with 53% to Jindal’s 39%.
Jindal can’t seem to get any traction in his effort to run for president. If he is included in a poll, he is usually at the bottom with 1-4% of the GOP vote.
And he is taking flack for endorsing one-term Republican U.S. Rep. Tom Cotton of Arkansas who is challenging incumbent Democratic Sen. Mark Pryor.
It seems Cotton voted five times against federal disaster aid, the only Arkansas member to do so. The legislation helps families and communities recover from tornadoes, hurricanes, floods, and other natural disasters and is crucial for Louisiana.