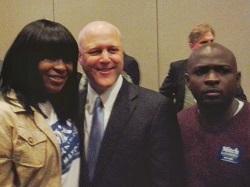 Then, one can argue that Mitch Landrieu has made himself vulnerable for such an attack, whether political or otherwise.  Crime is rampant in New Orleans.  Landrieu has continued the discussion of removing confederate statutes in the city, which proposal is wildly unpopular in many circles around the state, especially those who would likely vote republican this fall election.  Landrieu recently counter-attacked Vitter after the senator first launched a salvo against the mayor regarding New Orleans crime.

Today, Vitter, has issued a press release and a copy of a letter he sent to Landrieu offering a suggestion or two.

One can argue, the Senator has an issue and a target to his likings.   Here is the press statement and the letter he sent to Mayor Mitch Landrieu.

In his letter, Vitter recommended that Mayor Landrieu actively push his proposal to establish a new State Police Troop in New Orleans paid for by local revenue and tourism industry pledges, along with a much larger role for the State Police in training NOPD. Vitter also urges Landrieu to “focus on murders, not monuments.”

A copy of Vitter’s letter from today is below.

I was disappointed with your recent attacks against me in response to ‎my comments to the State Troopers Association on the New Orleans murder epidemic.

New Orleans' horrendous murder rate is not, primarily, the federal government's responsibility; it's yours.  Still, the federal taxpayer has given New Orleans more aid per capita in the last ten years than to any other city in history because of Katrina, including major and unprecedented law enforcement funding.

I have two strong suggestions regarding the New Orleans murder crisis:

1) Please actively push my and others' proposal to not just continue a State Police presence in New Orleans, but to establish a whole new State Police Troop there paid for by local revenue and tourism industry pledges, and a much larger role for the State Police in training NOPD.

2) For goodness sake, focus on murders, not monuments. 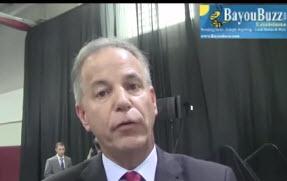 Much has been made over the reported decline in David Vitter's poll numbers, as presented in a recent controversial poll conducted by pollster Verne Kennedy.  In part two of Tuesday's WGSO-Bayoubuzz Google Hangout, moderator Jeff Crouere and publisher Stephen Sabludowsky, discussed if the drop is real, what might be driving the decline and John George's roll in the campaign and the poll.

More in this category: « More about Angelle's poll momentum and John Georges Financing Jindal, for what it's worth »
back to top