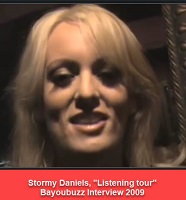 Remember when we were looking at the possible candidacy of Stormy Daniels for the position of United States Senate from this great state of Louisiana? Apparently, many of us do recall. Yet, as Daniels is becoming a well-known face, body and name, there appears to be those who are just discovering that she once flirted with running for that top national office.

In the past week, I've received two phone calls from major International media outlets who somehow came across my name in association with statements I wrote or said back when Daniels was being discussed as an opponent against David Vitter.  The gist of the media’s curiosity appears to be--was she really running for US Senate? If so, why? What was she like?